"Come to join our flock, Arisen?"

"It took the dragon only seconds to wipe entire nations from the map of the world. One of the nations which the dragon had utterly destroyed had been large and powerful, enough so that if not for the dragon’s attacks it may well have come out the victor of the Endless Strife. But it was not a tragedy without survivors and among those few who lived through the horrors of that attack was the son of the king, the prince of this lost country. One of his eyes, wounded in his flight from the dragon’s attack, began to fester and, before long, the pestilence would claim his life. He took his rage and regret and transmitted them to the page via ink and quill.

As the racking fever and pain gripped his body, he came to one conclusion: humans deserved to be destroyed. The world and its people clearly needed to be purged by the dragon’s claws in order to be reborn anew. He titled his writings “The Testament of Hopeless Regret” . The existence of this text eventually led to the creation a continent-wide secret society named Salvation. The Testament came to be blazoned always with the mark of a single eye: the Remaining Eye. This is most likely why Salvation favors the use of the cyclops, which they call “the beasts that beckon the destruction."

Then, many years later, one young man performed an unheard act: before a large gathering of his Salvation brethren, he tore out his own right eye. Where he came from or what brought him to the doors of Salvation is unknown. What is known is that he believed that in giving up his eye, he remade himself in the image of Salvation’s creator and impressed upon his brethren that this was the man who could lead their cause to success. Just as he had desired, the young man quickly rose through the ranks and eventually became their Great Leader, the one who guided them, and was given the name Elysion to refer to the paradise that they expect to follow death."
―Elysion's tale[1]

Salvation is a cult that worships and prays for The Dragon to come and bring destruction to all (which they consider "Salvation", as well as the beginning of a worldwide renewal). Members are generally anonymous and widespread throughout Gransys. The Remaining Eye symbol of a stylized single eye atop a primitive figure is the symbol of Salvation.

Salvation is led by a man who is referred to as "Elysion", named after the paradise all Salvation members expect to attain after death. Unbeknownst to its lesser members, Elysion can and will murder his subordinates to further Salvation's goals.

Their greatest enemy is the Arisen, considered to be The Dragon's Bane.

Salvation Members wear a set of Salvation robes - a long tunic paired with a hood that covers most of their face and all of their bodies. This robe is synonymous with the Cult of Salvation. Cult members also identify one another through the use of a Salvation's Badge.

The organization's main goal is to "help" The Dragon by dividing the country and instill chaos among its people. They do not believe it can be slain by mere humans and instead choose to join it in its carnage. 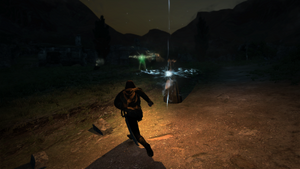 Active members of the cult (see Salvation Members) will attempt to waylay the Arisen, most commonly at night outside the walls of Gran Soren.

In addition to the Elysion, and the more active members such as Balsac, Ser Tolth, Tagert, Dillan, and the anonymous Salvation Members, many people in Gran Soren have some interest in the cult - although it may just be as a relief from their dreary lives through the membership of a secret society. Known members include Amity, Baden, Marcelo, and Ser Sairus.

Julien was also linked to the cult, and attended meetings, and is likely the shadowy figure known as the 'Night's Champion', though this was likely only due to his activities as a spy in Gransys.

Retrieved from "https://dragonsdogma.fandom.com/wiki/Salvation?oldid=307704"
Community content is available under CC-BY-SA unless otherwise noted.