Salomet is an NPC in Dragon's Dogma.

"Salomet, 'tis a name that calls up bitter memories." — Aldous

Salomet is an archmage of some note. He is credited with the creation of Salomet's Grimoire, a powerful spell book. Retrieval of the book forms part of the quest A Troublesome Tome.

The powerful magick potion Salomet's Secret was also created by him, and so named after him.

He was also one of the magick scholars summoned to Gran Soren castle for a conference of mages, with Salomet at head of the council. After he had obtained the collective knowledge of the council, he killed his fellow scholars and fled.[1]

Later Salomet becomes a suspect in an investigation of the theft of the Wyrmking's Ring, a valuable treasure belonging to Duke Edmun; retrieval of the ring forms the quest of the same name The Wyrmking's Ring. At the end of the final confrontation at the Bluemoon Tower, Salomet falls from the highest part of the tower, presumably to his death, and the Arisen succeeds in retrieving the ring.

Salomet wears a Dalmatica, Gleaming Bangles, and a Nebula Cape; although he casts spells associated with Sorcerers, he uses a staff usually wielded by Mages, the Unfettered Claw.

During the fight at The Bluemoon Tower

"We must keep our distance. Don't let him set the pace of battle."
"He wields some ensorceled trinket... 'Tis no easy thing to fight magick."
"The Wyrmking's Ring lets him cast with haste. Be careful!"
"The ring has granted him vast power!"

"The Wyrmking's Ring is a talisman of incomparable character
A vessel worthy of the whole of my magick!
What sublime bliss!
What heady rapture!
Yes... I will see my dream made reality
My essence... my very soul will inhabit the ring...
In it, I shall be reborn unto life everlasting!" 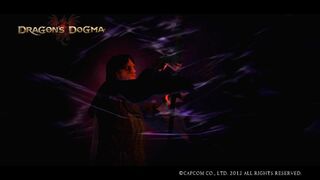 Salomet casting
Add a photo to this gallery

Retrieved from "https://dragonsdogma.fandom.com/wiki/Salomet?oldid=295685"
Community content is available under CC-BY-SA unless otherwise noted.