Royal Alms is a DLC weapon available in Dragon's Dogma.

"A bludgeon decorated with a monetary relief. Those it fells drop more coin."

Allows the bearer to mint their own coins, merely by striking an enemy. Five gold pieces are generated on every strike, and immediately added to the Arisen's account. 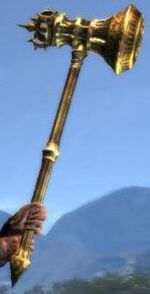 Retrieved from "https://dragonsdogma.fandom.com/wiki/Royal_Alms?oldid=251219"
Community content is available under CC-BY-SA unless otherwise noted.