Duskmoon Tower
Rotunda of Dread is a location in Dragon's Dogma: Dark Arisen.

Rotunda of Dread is an area in the labyrinth of Bitterblack Isle.

It is accessed from the third floor of the Duskmoon Tower, and does not connect to other dungeons.

It shares its arena style with The Black Abbey and has the same function as an arena for Arisen and Pawns to fight enemies. Each time the Rotunda of Dread is visited, different enemy combinations will spawn. The Rotunda may be immediately re-entered repeatedly with fresh enemies to fight ad infinitum, making it a great farming location.

If a Fiend-luring Incense is carried, a different set of monsters will appear.

A Macabre Sculpture can be found here. Native plants include Kingwarish and Cragshadow Morel. There are several armor piles from which useful items may be gathered, including Cleansing Earring, Liquid Vim, Blast Arrow, or Poison Flasks. 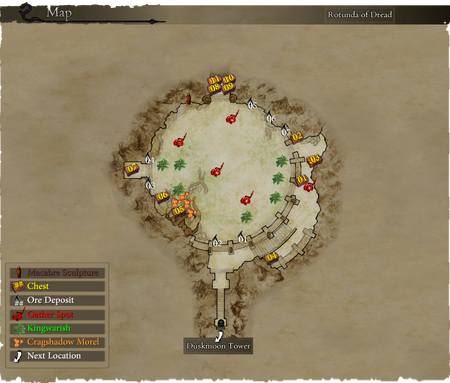 Refer to map for chest locations

" 'Tis not defeat to flee from battle, Master. ' Tis survival."
"Where do these trees find sunlight, I wonder."

Retrieved from "https://dragonsdogma.fandom.com/wiki/Rotunda_of_Dread?oldid=322416"
Community content is available under CC-BY-SA unless otherwise noted.