Start a Wiki
watch 01:42
Game Recap: Dragon's Dogma: Rise of the Fallen
Do you like this video?

Rise of the Fallen

Rise of the Fallen is a quest available in Dragon's Dogma.

"Ser Maximilian fears that the Salvation cult is somehow involved in the recent skeleton sightings. Investigate the matter."

This quest may only be acquired after completing the quests Come to Court and Seeking Salvation. Speak with Ser Maximilian in the Noble Quarter of Gran Soren to begin.

This quest has three ways of being completed. One is to shadow a cult member and obtain his key and the other is to speak with a cult member directly and obtain one of his two keys by force or Gold. The third way is to do both, as detailed bellow. The two keys obtained are different as will be further explained in the walkthrough. In order to shadow the cult member, the Arisen must wear a Set of Salvation Robes. It is not required to have the Salvation's Badge in the party's inventory.

In order to find the secret meeting, sleep at the inn until nightfall and walk under the bridge leading to the Venery. Approaching the bridge will trigger a cutscene showing two Salvation cult members, Dillan and Tagert, meeting underneath the bridge.

Wearing a Set of Salvation Robes to observe the Arisen may approach them without suspicion. Observe the meeting, and wait for Tagert to give Dillan a key. Then follow Dillan to the back of the Alehouse. Here he will hide a key in a barrel. Pick up the key (there is no need to wait until he is gone). This key is the First Key To Salvation, which will open a gate within the Catacombs.

Without wearing a Set of Salvation Robes, approach the two cult members below the bridge. One will run off, and the other, Tagert, will break his cover, and speak to the Arisen. He may be convinced to surrender the First Key To Salvation through bribery (by paying him 10,000 Gold) or by force for the Second Key To Salvation. These will open different gates within the Catacombs.

To obtain both keys: First, observe the meeting, wearing the Set of Salvation Robes to avoid spooking the salvation members. Then after Dillan receives the key and leaves, talk to Tagert to delay his escape. Take about 50 seconds or whilst in dialogue. If timed correctly, Dillan will be heard talking about hiding the key as you exit the dialogue. Then run after Dillan and get the first key from the barrel in the corner behind the Ale House, careful not to harm him or the guards will arrest you before you can reach Tagert. Then unequip the Salvation Robes and quickly run to Fountain Square to intercept Tagert when he comes running past Caxton's Armory. If the robes are unequipped and you choose the force option, you will be given the second key.

Return to the Catacombs, entering by the main entrance or by one of the secondary entrances if their gates have been previously unbarred.

The Second Key To Salvation opens a double gate on a lower level behind which is a horde of Stout Undead. Beyond these Tagert will approach and plead for the cessation of Salvation's activities - he is then likely to flee the scene or cower in fear. The First Key To Salvation unlocks a gate near the upper platform of the Catacombs' elevator, on the first or highest level of the catacombs. This entrance leads immediately down by stairs to a lower level. Both keys provide access to the same area. The Second Key allows access from below and the First Key allows access from above. 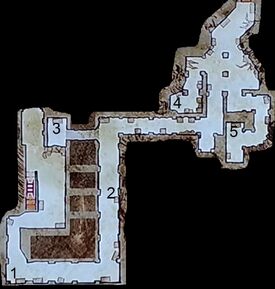 Regardless of which key was used, open the sarcophagi scattered about the area to collect five gems. These are the First, Second, Third, Fourth, and Fifth Gems of Salvation.

Together, these five gems will open the large door with five indentations. The area around the magic door is guarded by Skeleton Knights and Skeleton Mages.

Once all five gems have been obtained, unlock the large door and enter the room for a showdown with the Salvation member.

Balsac is one of the leaders of the Salvation cult and the source of the Skeleton scourge. Balsac has two heath bars and can summon Skeletons, Skeleton Knights, and Skeleton Mages at will, so kill him quickly. Focus on slaying Balsac, as his demise will instantly destroy any Skeletons he has summoned.

Report Back to Ser Maximilian

Once Balsac is slain, open the chest containing Crimson Teeth daggers and head back to Ser Maximilian in Gran Soren's Noble Quarter. Speak with Ser Maximilian to complete the quest.

Retrieved from "https://dragonsdogma.fandom.com/wiki/Rise_of_the_Fallen?oldid=299500"
Community content is available under CC-BY-SA unless otherwise noted.