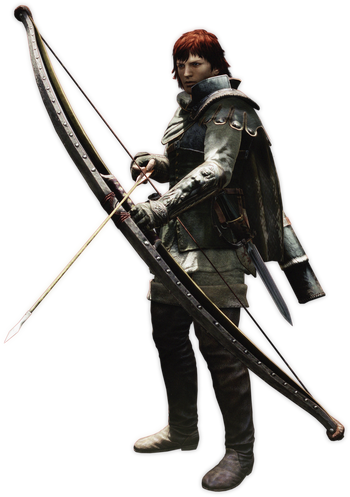 The Ranger is an Advanced Vocation in Dragon's Dogma. It costs 1,000 Discipline Points to switch to this vocation.

"A strider whose exceptional bow skills make them a deadly threat from afar."

Ranger is a long range attacking class, utilising the Longbow, able to also defend itself in melee with Daggers - all of a Ranger's offensive power comes from Strength -it does not use magick.

For armor Ranger's generally Light Armor Sets, or similar non-set components - A trade off between defense and mobility is required. Custom arm armor leaves one hand unrestricted for dextrous use of the bow. A ranger's armor requirements may be slightly less than the strider due to them fighting more at range, and less in melee.

Rangers have the very high stamina and strength growth to the disadvantage of Defense and all magick values - this matches their skill set which is focused on long range attacks, including 'sniping' shots - damage from the longbow is optimal at much greater distances than that of the Strider's shortbow. Their set of Dagger Skills are inferior to that of a Strider, though they can still make an effective climbing attacker, and need not fear close melee.

Skills in bold are unique to the Ranger.
Skills in italics can only be obtained via Skill Rings and Bands found in Dark Arisen.

The Equipment of the Ranger in the Change Vocation Menu is:

Great Gamble is useful when taking Screenshots of large areas at distance.

Retrieved from "https://dragonsdogma.fandom.com/wiki/Ranger?oldid=307310"
Community content is available under CC-BY-SA unless otherwise noted.