Start a Wiki
watch 01:27
'Dragon's Dogma' Lore: Purification
Do you like this video? 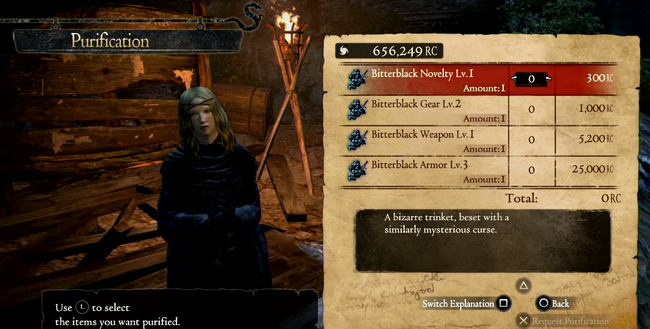 Purification is a service offered by Olra in exchange for Rift Crystals to cleanse cursed, unusable artifacts to obtain helpful equipment and items. Cursed objects can only be found on Bitterblack Isle.

Cursed items on Bitterblack Isle come in several forms: Novelties, Armors, Weapons and Gears, all of which are available in three tiers. The higher tiers generally yield better equipment, but also cost more Rift Crystals to get purified.

Rewards include useful, rare and unusual items: scrolls that unlock Secret Augments, high level weapons and armor pieces, some with special magickal effects and of greater quality than the traditional equipment obtained in Gransys; and rings and bands which upgrade vocational Skills to a third tier when equipped (see Dark Arisen Skills).

With the exception of cursed Novelty items, the result is directly related to the Vocation of both the Arisen and their Main pawn at the moment of purification.

Vocation-specific items can be classed into three types, often referred to as "red" (melee), "yellow" (daggers and bows), and "blue" (spellcasting) types - the colors used in the vocation icons indicate to which class the vocation belongs; hybrid vocation symbols have two colors signifying their blend of two vocations, e.g. the Magick Archer symbol is both yellow and blue indicating both bow/dagger and magick use.

In general the weapon obtained from purification will fit one of the vocation colors matching either the Arisen or Main Pawn's class. For example:

The first principle of cursed item purification management is to (if necessary temporarily) have both Arisen and Main Pawn in suitable vocation colors for the type of item desired.

Bitterblack Weapons yield high level weapons of increasing power according to tier, some of which have unique, or special and magickal effects not obtainable in Gransys.

Bitterblack Armor yields high level armor of increasing Defense according to tier, some of which have unique, or special and magickal effects not obtainable in Gransys.

The outcome of cursed item purification is predetermined on a fixed but apparently 'random' list hard-coded into the game. Saving before purifying and reloading (or godsbaning) will not change the results for purification.

On purification of a specific type of cursed item (i.e. Gear Lv.3 or Armor Lv.2) its 'list' will advance, thus giving a new result on the next purification of the same type.

The 'lists' for gear, weapons, and armor contain different results for each vocation colors, though both bitterblack gear and armor may give equipment that can be used by all classes. On purification the list advances for all three color types, not just the color type of the item obtained.

Only Hybrid vocations have opportunities for purifications in more than one of the three colors to give useful results for the Arisen. More specifically:

In general purifying with both Arisen and Main Pawn as the same single-color vocation gives a 100% chance of an item from that color type list.

Purification generally cannot be 'gamed' such as by exploiting Save/Reload systems or by godsbaning.

A simple way to maximise benefits from weapon and gear purification is to reload, change vocations, and re-purify under a different vocation color if the originally obtained item was completely useless or an unwanted duplicate. This is only effective if the Arisen switches their vocation often and thus can use results from more than one color group; or if Arisen and Main Pawn usually adventure as vocations of different color groups.

"'Tis cursed"
"We'll know naught of this item till its curse is undone." 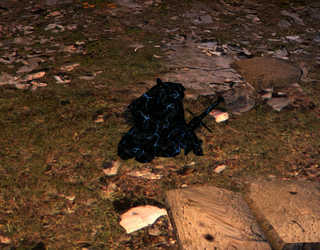 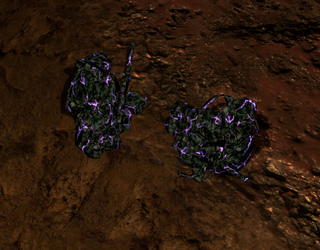 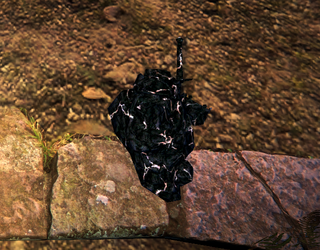 Bitterblack Novelty Lv. 3
Add a photo to this gallery
Retrieved from "https://dragonsdogma.fandom.com/wiki/Purification?oldid=310656"
Community content is available under CC-BY-SA unless otherwise noted.