Pride Before a Fall

View source
watch 02:06
What is Pride Before a Fall?
Do you like this video?
Play Sound

Pride Before a Fall

Main Quest
Royal Orders Quest
Pride Before a Fall is a quest available in Dragon's Dogma.

A straightforward quest to complete, with three possible outcomes. One path gives the player the unique item, the Wizard's Vizard, and requires forward planning to complete.

"Mercedes is determined to undertake a mission under the Royal Orders. Look after her safety."

A Royal Orders Quest. Follow Mercedes Marten to the Windbluff Tower and ensure her safety.

This quest becomes available after completing both Trial and Tribulations and Griffin's Bane. Obtain the quest by speaking with Aldous and selecting "Assist Ser Mercedes".

Speak with Mercedes and travel to the tower

After accepting the quest from Aldous, exit the castle and speak with Mercedes at the front gate to the Noble Quarter. Apparently, there is unrest among the soldiers at the Stone of the North (the Windbluff Tower).

After speaking with Mercedes, she will depart for the Windbluff Tower. Travel north to the Windbluff Tower, besieged by two groups of soldiers engaged in battle. Leave the soldiers to fight among themselves and head up the stairs to the main castle building.

In the upper courtyard, Mercedes confronts Julien and they duel.

The duel between Mercedes and Julien has two different outcomes. Each outcome grants different reward weapons and will impact the game differently, so choose which outcome is preferable:

Julien wins.
Idly observe the duel or walk out of the courtyard during the duel. Mercedes will lose the duel. Julien escapes and Mercedes will hand over her Silver Rapier. Julien will automatically win if the Arisen takes part in the fight and damages Mercedes or if Julien lands an attack on the Arisen.

Julien is defeated.
Interfere in the fight and slay Julien. The time the Arisen can intervene is limited to Mercedes being hit three times. After Julien is slain, attempting to walk away will play a cutscene and cut off the opportunity to aid Julien or give gifts to Mercedes. If Julien is revived it will be possible later to obtain the Wizard's Vizard magic shield. Note: Reviving Julien before this particular cutscene plays is necessary or he will disappear; it is triggered only when the Arisen reaches a particular spot in front of the open doorway that serves as an exit. It is also possible to give Mercedes gifts until this particular cutscene plays if the player wishes to maximize her affinity towards the Arisen. After attempting to walk away, the cutscene plays and a disappointed Mercedes will hand over a Cutlass.

The Arisen sides with Julien
If the Arisen interfers with the duel, and attacks Mercedes she will be defeated. In this case she gives the Arisen a Cutlass before departing.

The last possible moment to interfere is right after Mercedes says "Rrgh...! Bastard!" while Julien is beating down on her shield with his Threaded Cudgel. Otherwise the cutscene in which Mercedes is bested starts.

Report Back to Aldous

Heading down the Windbluff Tower stairs, the battle between the soldiers has been decided. Speaking with Ser Daerio before leaving provides some interesting background information. Head back to Gran Soren, and report to Aldous.

Regardless of the duel's outcome, Mercedes is crestfallen and plans to leave for Hearthstone to gather aid for Gransys.

If Julien is slain, and then revived with a Wakestone he will admit defeat and return to the Duke's Demesne of his own volition, turning himself in for his crimes. He can then be later found in the castle dungeon. Speak with Julien in his cell and he will gift you his Magick Shield, the Wizard's Vizard.

After the rebellion the fort is deserted, with all the rebellious guards and Ser Daerio slain. Ser Francis may be found outside the tower after the battle.

"There's talk of revolt in the north. Won't say I cannot understand the impulse...manning a desolate stronghold that serves no purpose in staying the Dragon is mean work. There's only so much fear and idleness a man can take. Especially on those meager wages."

Orsay, one of the castle residents, confirms that Mercedes may need more than moral support in this task if battle happens:

"Lord Julien is well enough, but Ser Mercedes is more burden than boon, it's told. She's the daughter of the Lord of Hearthstone, you see.... and for a knight sent to aid the Duke, one hears precious little praise of her skill. If the woman falls before the dragon arrives, we'll have another war on our hands."

Ser Daerio reveals the full extent of his involvement in the revolt; he is Lord Julien's man:

"It is as you see, Arisen, the Stone of the North crawls with the agents of Salvation. The Night's Champion is a fearsome intellect. He authored and executed the scenario in full. He scoured the Duke's men for those with ties to Salvation, gathered them here and sparked a revolt before anyone was the wiser. Myself, I put no stock in Salvation's creed. But the Champion claims that the Duke is lost in this war with the Dragon, and in that I feel he speaks true. I will not gainsay your mettle, ser, but even the Arisen is human. The wyrm cannot be slain. Pray, forgive me. As a commander I am duty bound to observe the conditions and exercise my best judgment. I take no joy in crossing you, ser."

Ser Francis on Julien's treason, if the latter was wakestoned.

"The uprising at the stronghold was Salvation's handiwork Villains all, those zealots... 'Tis a painful thing to hear it was Lord Julien what lead them, though. I'd always heard him told a good and noble knight. I suppose the greatest of men is still human. Hmm. He'll be rotting in a cell below the castle now. 'Tis a terrible waste..."

"I am bested, ser... Slain by your hand, and brought back as well... Such utter defeat ill leaves room for argument. I shall return to the capital and place myself at the mercy of the court. They will have my confession, and my head, should they wish it... And you shall have the glory, ser. Worry not, I've no design on running. Even as I am, I've some semblance of pride. I leave you with a word of warning: The revolt was but a diversion. The killing blow will be delivered elsewhere... Pay heed, ser."

"Leave this place to us, Arisen! Find Ser Mercedes!"
"She made her wishes clear... We were honor-bound to accede."
"It has been some time since we last saw Lord Julien, has it not?"
"Gransys' fate weighted upon him. He cared, in his own way..."
"Seems the uprising to the north has been quelled." 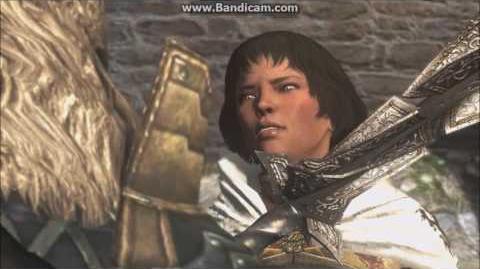