Start a Wiki
watch 01:52
What are Portcrystals?
Do you like this video?

Portcrystal is an item available in Dragon's Dogma.

"A marker to be placed anywhere one might wish to return; use of a ferrystone will transport you there in an instant. Traversal item."

Portcrystals are items that can be placed in the world and teleported to with a Ferrystone. Portcrystals can be picked up and set down whenever one wishes to relocate it - there are also permanent portcrystal rings - notably the one outside the Pawn Guild in Gran Soren.

Permanent portcrystal sites are found in a few key locations of Gransys - they consist of several darkened Portcrystal stones embedded in the ground forming a ring.

A permanent Portcrystal is located in Gran Soren next to the Pawn Guild in the Craftsman's Quarter.

In the Dark Arisen Portcrystal Rings are found in two additional locations - one located just outside of Cassardis, and another at Bitterblack Isle Harbor.

Portable Portcrystals are heavy but carryable items, that are self illuminated with a blu-ish light. The can be picked up and places at any location in the open areas of Gransys, but can't be used on Bitterblack Isle, or place in underground locations, or habited areas like Cassardis.

Additionally, in New Game Plus, Portcrystals can be purchased from Mountebank at the Black Cat in Gran Soren for 200,000 Gold 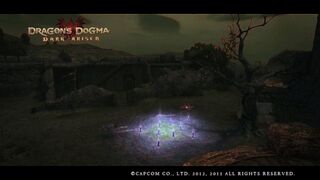 Causing mischief with multiple Portcrystals at the Abbey
Add a photo to this gallery
Retrieved from "https://dragonsdogma.fandom.com/wiki/Portcrystal?oldid=307614"
Community content is available under CC-BY-SA unless otherwise noted.