Phantasm is a Ghostly enemy in Dragon's Dogma.

Phantasms are electrically charged Ghosts commonly found in Gransys. They share similar abilities and properties of their lesser cousins, the Phantoms, including their immunity to physical attacks, but are stronger than those.

Phantasms are naturally electrified; physical contact may inflict Thundershock. They will cling onto their victims, affect their movement and drain their health rapidly. Pawns whose health is drained by Phantasms are not rendered unconscious but are returned to the rift and cannot be revived.

For full information, refer to the Bestiary page or the according section on the Phantom page.

In addition to witnessing these techniques, it is necessary for Pawns to participate in killing 50 Phantasms either with their own Arisen or while travelling with others.

" 'Tis no common phantom!"
"This phantom is charged with lightning!" (no Bestiary knowledge)
"Lightning courses through them!"
"The hairs on my neck stands on end..."
"Don't allow it to possess you!"
"It draws the life from its host!"
"I feel pins and needles... Phantasms, Master."
"A plague of phantasms!"
"We must end this, quickly!"
"My weapon passess through it!" 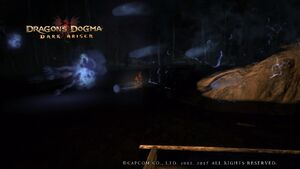 A Phantasm surging and another grasping 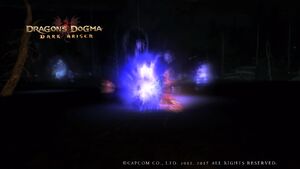 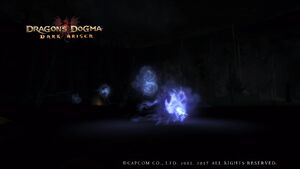 Grasping
Add a photo to this gallery

Retrieved from "https://dragonsdogma.fandom.com/wiki/Phantasm?oldid=316758"
Community content is available under CC-BY-SA unless otherwise noted.