Petrification is a powerful debilitation that slowly turns the victim into stone. Petrification is easily one of the most dangerous status ailments in the game. High Halidom and common medicines cannot cure it, and its uncommon nature may take the Arisen by surprise.

When afflicted, the victim will start to have all forms of movement hampered, similar to Torpor, and gradually both the body, armor and clothing will change to a greyish stone texture and color. After 40 seconds the process will be complete and the victim turned entirely to stone and is completely immobile. In most cases the petrified subject will remain statue-like for several seconds before shattering into dust.

Sorcerers can inflict Petrification using the Petrifaction spell. The Arisen can also use a Petrifying Arrow or Jewel of Petrifaction; pawns don't seem to use Jewels. Most giant monsters are not susceptible to Petrification, but Garm, Eliminators, and Poisoned Undead are. If a bow-using pawn is familiar with Garm, it will use Petrifying Arrows against them.

Smaller creatures can be relatively easily petrified - usually between 3 and 6 standard Petrifying Arrows are required for most creatures in Gransys. Magnitude can be used to increase the potency of the Petrifaction spell, whilst the augment Morbidity or the Ranger skill Spiral Arrow both work with special arrows.

Once an Arisen is completely turned to stone, they will immediately shatter and die, but can still be revived with a Wakestone; a petrified pawn will remain statue-like for some time, during which it can be cured by the Arisen or another pawn using a group curative. Once a pawn shatters, they will return to the Rift, dead. The process from infliction to shattering takes approximately forty seconds.

A petrified pawn may cure itself, but has only a short window in which it is able to use a cure - after the petrification effect spreads so far as to cause actions to be frozen the pawn will not be able to use a curative. In general curatives such as Secret Softener should be given before taking on any enemy capable of inflicting Petrification.

The augment Intervention appears to give immunity to petrification.

Of armor sets found in Gransys, the Maiden's Set, Ancient Armor Set, Heresy Armor Set, and Chaos Armor Set can give complete protection against Petrification; and from the Everfall the Golden Lion Set, Holy Armor Set, and Abyssinal Armor Sets can be added to this list; armors from Bitterblack Isle also give 100% resistance when gold rarefied - these are the Hellfire Armor Set, Sin Armor Set, Shadow Armor Set and Oblivion Armor Set.

In Dragon's Dogma, the Set of Fisherman's Garb also gave up to 99% resistance to Petrification but in Dark Arisen the outfit no longer has this property.

The most resistant set of armor is probably the Ancient Armor Set, with 168% resistance. 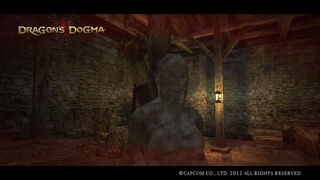 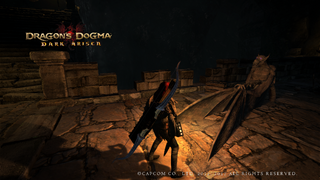 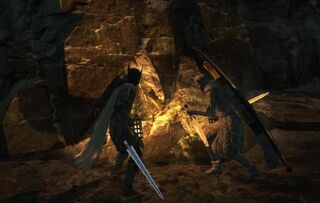 A Petrified Pawn in Soulflayer Canyon
Add a photo to this gallery
Retrieved from "https://dragonsdogma.fandom.com/wiki/Petrification?oldid=322184"
Community content is available under CC-BY-SA unless otherwise noted.