Pastona Cavern is a location in Dragon's Dogma.

Pastona Cavern is a canyon path that stretches from Windworn Valley in the North, to Cutlass Cape and The Bluemoon Tower in the South. It includes the locations Bandit's Den and Smugglers' Pass as well as a number of alcoves and structures dug out from the canyon walls.

The Den and much of the Cavern are occupied by Bandits, whilst the Smugglers' Pass is home to Skeleton Knights. Both are full of chests, with much good loot. Spiders, Crows and Snakes are also found here, and at night the open areas outside the bandits' control also become infested with Skeleton Mages and Skeleton Knights.

At the Bandit's Den there are two Snow Harpies and a Golem.

There may also be two Wakestone Shards - one at the Windworn Valley end, at the far end of a small gorge; another can be found in Smugglers' Pass.

" 'Tis a far cry from the roads we're accustomed to, that's for certain.."
"Gran Soren is ever quite the sight."
"Seems this place is dogged by thieves."
"If you were of a mind to climb it, it may well be possible..."
"... What is this place?
"What do you make of this, Master? Shall we enter?" 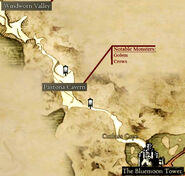 Add a photo to this gallery
Retrieved from "https://dragonsdogma.fandom.com/wiki/Pastona_Cavern?oldid=312938"
Community content is available under CC-BY-SA unless otherwise noted.