Ophis' Domain is a location in Dragon's Dogma.

Ophis's Domain is a palisade enclosed space in the northwestern part of the Barta Crags south of the Greatwall Encampment. At first glance, the place seems as though it may be a soldier camp, but upon closer inspection, it turns out to be a giant corral. This corral is where Ophis keeps her beloved pet Cyclops.

A female thief, Aurene, has been left in charge of the domain. She is not hostile, even in the presence of male party members.

There are three chests in the area.

The pet Cyclops is tame enough to be fed - feeding it forms part of the quest Thick as Thieves.

To feed the Cyclops, capture or kill a monster and carry it to the Cyclops- Goblins are a good choice. A dead offering can be left at the Cyclop's feet, or upon its "dinner table". A live offering is best carried and held in front of the Cyclops - though this method risks the carrier become a meal instead.

The Cyclops will only feed once it notices the offering - this should be placed in front of the Cyclops at its feet.

Take good care to not accidentally hit the Cyclops - once enraged the creature will likely need to be killed and is never replaced - furthmore Ophis will never forgive the killer. The Cyclops is very docile and never initiates an attack, and can even be climbed - the Cyclops doesn't mind at all. However it is stupid and will try to make a meal of any standing still in the wrong place for too long.

" 'Tis hard not to feel small in a chamber built to a cyclops's scale."

" 'Tis a queer growl comes from beyond the paling... " 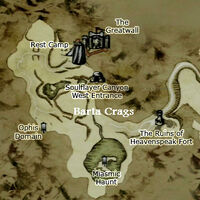 Add a photo to this gallery
Retrieved from "https://dragonsdogma.fandom.com/wiki/Ophis%27_Domain?oldid=316050"
Community content is available under CC-BY-SA unless otherwise noted.