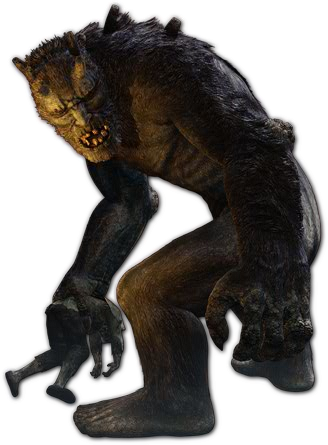 Ogre is an Enemy in Dragon's Dogma.

Smaller than a Cyclops but bigger than a human, these creatures possess a level of intelligence and brute strength that make them very dangerous, especially in close quarters. It resembles and behaves like a giant gorilla-like creature. Ogres are extremely powerful and quite agile.

When Ogres grow enraged, their rear end starts to glow red. An Ogre is cunning enough to jump into the air and land on its back in order to crush any who are climbing them or attack them from behind.

They get excited and 'giggle' when they see females and speed up their fury and attack faster the more women are in the party. When Ogres grow enraged, their cheeks and buttocks will turn pinkish-red, they will then roar and charge wildly, flail their arms like huge gorillas. Ogres can turn corners with ease, making it difficult to dodge. They can grab a victim and run off a short distance to chew on them, causing a significant amount of damage. 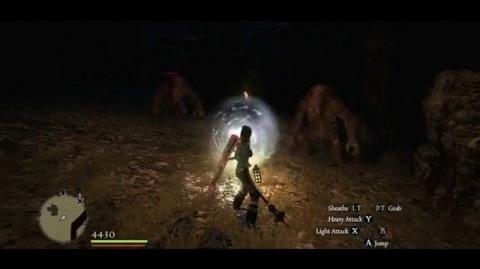 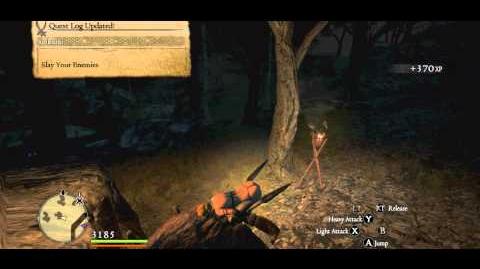 Two Ogres slain near The Abbey in the Wilted Forest.
A Strider demonstrating climbing technique. Attack an Ogre's head in order to slay them quickly.

Ogres will grab and attempt to eat the Arisen and allies. When males are grabbed the Ogre will reject the prey with disgust after a few bites, usually leaving it staggered.

Additionally, Ogres will eat dead foes. Even if they have already spotted the Arisen and become aggressive, they may stop to eat dead in their path and forget about battle. Leaving a corpse in the ogre's path and hiding will usually distract them even if they have already seen the party, but provided they have not become fully aggressive. Even when in obvious view an Ogre will continue eating. Attacking, approaching its personal space, or stealing their meal causes them to become aggressive once more.

Pawns usually spoil all attempts to pacify Ogres with bait by attacking.

In addition to witnessing these techniques, it is necessary for Pawns to participate in killing 50 Ogres either with their own Arisen or while travelling with others.

"The sight of women excites it!"
"Counter after it strikes!"
"Take care when scaling its back!"
"Its brute strength is deadly!"
"'Tis more vicious than a Cyclops!"
"Their raw power makes them a threat"
"Careful, they're fast for all that muscle"
"An Ogre... Of all the poor luck..."
"Grab hold and pull it down!"
"'Tis flushed red with anger!"
"Its kind loves women above all. Be ready."
"It hungers for humans. Women, most of all."
"Its kind targets women over all others!"
"Stay ready. It will come at women first!"
"I'll drag it to the ground when it attacks!" 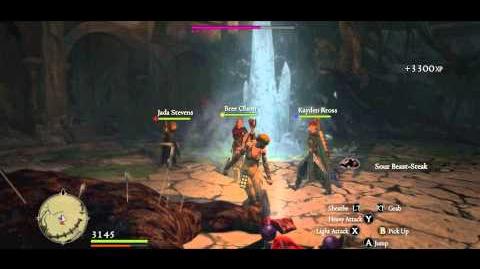 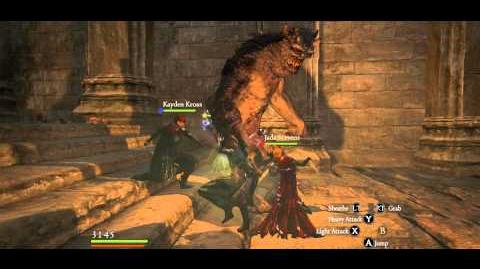 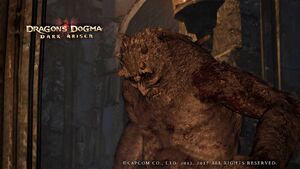 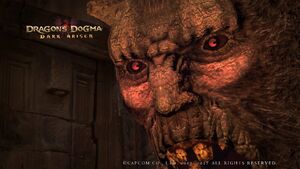 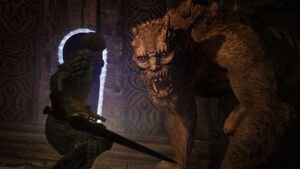 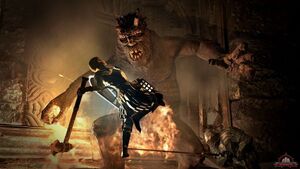 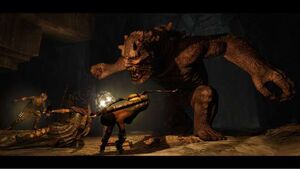 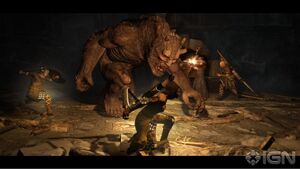 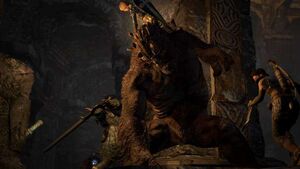