Noonflower is an item available in Dragon's Dogma.

"A precious southern flower that rarely blooms. It fetches a quite the pretty coin as a result."

The Noonflower is found only on a ledge outside Noonflower Cliff Cave in the canyon leading to Bloodwater Beach, in the southern parts of the Verda Woodlands. The Noonflower regrows every five days.

When consumed the Noonflower will restores 30 health points. It is the affinity item for Quina.

The noonflower can only be reached from jumping from a ledge on the opposite (east) side of the canyon. The west side has drops too high to climb or jump without extra aid.

A route accessible to all is to travel west from the Tomb of the Unknown Traveler to reach the ledge - follow the line of the cliff if unsure.

For Arisen with good jumping skills the east ledge can be reached by climbing up from its lowest point near to the canyon's exits on to Conqueror's Sanctuary.

The noonflower is located on the opposite cliff ledge, very close to where the two sides come a "jumps breadth" apart. 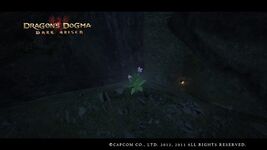 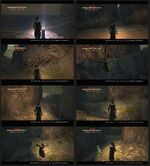 Retrieved from "https://dragonsdogma.fandom.com/wiki/Noonflower?oldid=299793"
Community content is available under CC-BY-SA unless otherwise noted.