Start a Wiki
watch 02:44
Game Recap: Dragon's Dogma: No Honor Among Thieves
Do you like this video?

No Honor Among Thieves

No Honor Among Thieves is a quest available in Dragon's Dogma.

"A gang of bandits has tightened its grip on the southlands. Appease them or risk perilous travel in the region."

Win the trust of Maul and the Iron Hammer Bandits by completing some unfinished business of theirs.

Start this quest by speaking to Maul, who is located in the Aernst Castle Ruins south of the Vestad Hills.

The Iron Hammer Bandits in the Aernst Castle Ruins are relatively friendly and will not attack the Arisen unless provoked.

In order to gain his trust, Maul asks the Arisen to complete one of two tasks: either slay ten Westron Labrys Bandits, a rival female bandit gang; or deal with a deserter from their own ranks. The latter task is only possible if the Arisen has previously completed the quest An Uninvited Guest.

Vanquish the rival thieves to the West

The thieves Maul refers to are the members of the all-female bandits to the far northwest of Gransys near the Barta Crags. The Westron Labrys Bandits, who are led by their leader Ophis, make their base in The Ruins of Heavenspeak Fort.

Note: Killing any ten female bandits will suffice. The rival thieves are plentiful along the path leading northwest to the fort where their base of operations is located. The Arisen does not have to kill the bandits within The Ruins of Heavenspeak Fort, or their leader Ophis.

Once ten female bandits have been slain, report back to Maul to deliver the good news or continue to the next task.

Dispose of a deserter from their gang 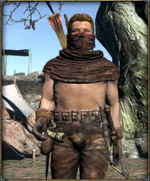 The deserter Maul refers to is the bandit Pike, who can be found in Cassardis and was involved in the quest An Uninvited Guest. In order to do this task, that quest must have been completed.

After "An Uninvited Guest" Pike can be found wandering Cassardis, mostly near Pablos' Inn, the Village Chapel or the Unusual Beach.

Upon confronting him, he'll give a brief story about his past and how he was adopted by Maul and ask the Arisen what he should do.  There are three choices: Only convincing Pike to return to the gang and repent for breaking his bandit's oath will further the quest.  The other options cause him to remain in Cassardis, dithering.

Alternatively, Pike can be assassinated in the village.

Once either or both of the tasks have been completed, report back to Maul and observe the outcome. Maul is pleased that the Arisen has completed his tasks.

If Pike was convinced to come back and give his life to Maul, Maul will be surprised that Pike has decided to come back, berate him for being a lousy thief and spare his life for the time being due to his loyalty and remorse.

Maul will consider the Arisen to be an equal and will bestow Maul's Badge of Amity on the Arisen, which supposedly allows safe passage through the Vestad Hills.

The quest reward consists of Maul's Badge of Amity, plus several thousand Experience Points, a few thousand Gold, and a few Rift Crystal.  The rewards are greater if both tasks are done.

Retrieved from "https://dragonsdogma.fandom.com/wiki/No_Honor_Among_Thieves?oldid=304780"
Community content is available under CC-BY-SA unless otherwise noted.