Start a Wiki
watch 01:58
Quest Tips: Nameless Terror
Do you like this video?

Seeking Salvation or Come to Court

Nameless Terror is a quest available in Dragon's Dogma.

"Beg pardon, Arisen. I'm sure this is a small matter, but I would yet have you hear it. I was at my post before the castle not long ago, when a strange man came around asking after your whereabouts. Even more curious, when I told him I knew not, he swore me tell no one of our encounter. Have you some enemy, Arisen? His eyes were..mad. I shall never forget them... I beg you, be wary." - Ser Rickart

The air is thick with a sense of foreboding. Does aught lurk ahead in the shadows? Are you being watched?

This quest becomes available just before meeting with the Duke in Come to Court. Speak with Ser Rickart just outside Gran Soren's south gate in order to obtain the quest.

When spoken to, Ser Rickart will hand over an Unsigned Letter as well as a foreboding warning. This initiates the quest to hunt down and kill the assassins known as the Nameless Men.

The assassins only strike at night. Survive the ambushes, and defeat the bandits' leader Zero to obtain the Tightly Folded Letter.

There are five groups of assassins to seek out and kill on the roads. Sleep at an inn until night and travel to the areas marked on the maps below.

On the road just past the bridge northwest of Gran Soren right before the path forks east and west. Be wary of a massive skeleton attack at the same time.

On the stretch of road which is between the half-way gate-point to Gran Soren and The Mountain Waycastle, near the Mountain Cottage and the Harpy Hills. The ambush is a bit tricky to find as there are multiple spawn locations. One ambush location is near the Mountain Cottage, or at the captive cage with Harpies around it, or at the big tree at the other end of the trail, or close to Gran Soren before reaching the gate and Goblins. If Darkness does not appear at all along this route, the Arisen may proceed directly to face Rouge and Noir before finally facing Zero, their leader. It is possible to complete this quest without ever slaying Darkness.

Follow the road from the Encampment to The Mountain Waycastle, they will be at a loop in the road just north of the Abandoned Storehouse.

Zero should only appear if all the other Nameless Men are killed, although many Arisen encounter Zero outside Cassardis without ever facing Darkness along the mountain Moonsbit Pass. Just outside Cassardis' main gate, the leader Zero will spawn.

Once he is defeated, he will acknowledge the Arisen as genuine and gift the Tightly Folded Letter - completing the quest.

Phantom
"I am he who sheds the mortal coil."
"We are the Nameless Men. Your life belongs to us."
Ghost
"I am he who treads where death fears walk."
Soul
"I am he who slips the earthly bonds"
Spirits
"I am he who sets the world to burn."
Raven
"I am he who salts the wound. Your end shall not be quick."
Hawk
"I am he who flays the skin. Let us see if you can stand for true."
Condor
"I am he who strides the sky. Your cowardice shall be exposed."
Darkness
"I am he who walks the broken road."
"I bear no grudge against you, Arisen, but you shall die by my hand just the same."
Rouge
"I am she who turns the wheel eternal. Your final thought shall be of me."
Noir
"I am she that ends all things."
Zero
"I am the void of stygian black. I am wonder and despair. I am annihilation."
"You stood tall against my Nameless Men, Arisen. But you will find my challenge of a different caliber. I am the great darkness -- part of every thing, part of every one...."
"And I am your doom."
"Heh heh.... I see you now...for a true....Arisen..." (upon death) 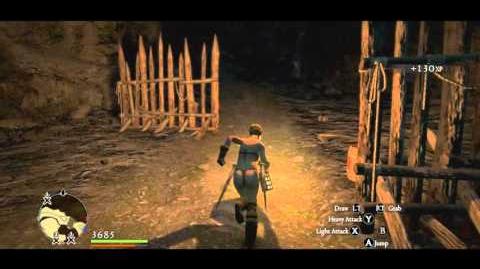 Nameless Terror (quest walkthrough)
Although this quest can be completed over several nights, this walkthrough was completed in a single night. Speed is essential, so focus on slaying the Nameless Men and ignore the other enemies. Listen for the "dramatic" music to indicate when the Nameless Men will appear. Sleep at the Union Inn until night, then exit from the north gate. Run north across the bridge to confront the first ambush. Run back across the bridge southwest to the Ancient Quarry's north entrance for the second ambush. Run south towards Cassardis, through the Moonsbit Pass and slay the single enemy wizard (third ambush) near the big tree and harpies. Pass through the Mountain Waycastle and head southeast for the fourth ambush. Then run past The Encampment to the Cassardis Portcrystal to confront the leader, Zero (fifth ambush). Slay him and the quest is complete. 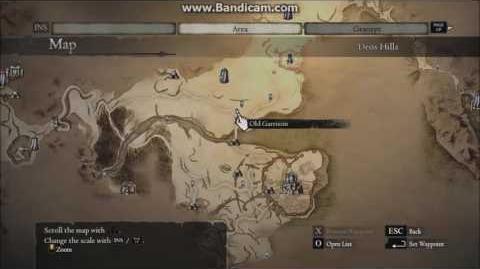 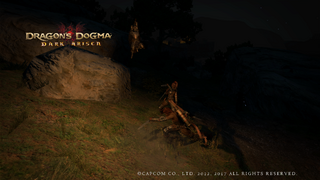 Rogue and Noir attack
Add a photo to this gallery

Retrieved from "https://dragonsdogma.fandom.com/wiki/Nameless_Terror?oldid=302470"
Community content is available under CC-BY-SA unless otherwise noted.