View source
watch 01:50
Who is Mystic Knight?
Do you like this video?
Play Sound 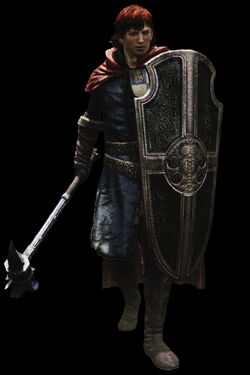 "A versatile warrior who can also assist with enchantments and support skills."

Mystic Knights use both melee and magic in battle. They are a frontline class able to fight in the toughest of situations. Their primary weapon can be either a Sword, Mace, or Staff; their other key piece of equipment is a Magick Shield.  This is generally a giant magickally-imbued shield that they use for both defense and as a focus to cast spells.

For armor, Medium Armor Sets are best suited to Mystic Knights; the mixed requirement of magic and melee favors usage of armors with both high magic and physical defense. Because of this iron is not favored and composite materials are often used, tough animal skins and hides are also a good choice. Mystic Knights have access to a very wide range of armor including almost all bow and sword user designs plus some sets specific to themselves and Warriors. The huge shield makes up for the general lack of physical defense that iron provides.

All the Mystic Knight's offensive spells require Magick to be effective in battle whilst those skills inherited from the Fighter class rely entirely on the knight's Strength. Additionally a Knight will usually require high Defense unless they can be certain of blocking all attacks; thus a Mystic Knight generally has a requirement for a balanced character, and so, as an Arisen gains experience, the Mystic Knight increases in these areas in a balanced manner.

Pawns can not learn the Mystic Knight vocation, though other humans have done so. Some Gransys soldiers in The Blighted Manse are Mystic Knights, equipped with a Knight's Honor shield and will use staff, shield, and sword skills against the Arisen, including Sopor, and Holycounter. Skeleton Lords, Silver Knights and Living Armor are undead Mystic Knights.

Lord Julien wields a Mystic Knight weapon and shield but does not use any of the Mystic Knight's magickal skills. Ser Raffe carries a Fine Magick Buckler but is also just a knight.

Skills in bold are unique to the Mystic Knight.
Skills in italics can only be obtained via Skill Rings and Bands found in Dark Arisen.

Two Mystic Knight skills stand out, alone and in combination when facing the fiercest foes: Ruinous Sigil and Great Cannon. Ruinous Sigil creates a defensive area which fires upon any foe entering its field, whilst Great Cannon summons a floating sigil that conjures orbs when struck that seek out and damage near and distant foes. Both of these spells will take on the element of the weapon used to cast these sigils.

Furthermore, when used in combination by casting these two spells within the field of effect of one another the utility of these already powerful spells is further magnified, as a Ruinous Sigil will fire the Great Cannon sigil when activated, creating an automatic and deadly response to any enemy that dares approach. For in-depth discussion of the tactics of combined use, see Great Cannon.

A third important and useful skill is Abyssal Anguish which allows the Mystic Knight to stack two elements. Abyssal Anguish adds dark enchantment to a weapon, but does not overwrite the previous element. An Abyssal Anguish enchanted weapon also has a shockwave on certain strikes with good stagger, plus extra range added to the weapon. Since this skill effectively combines the damage from the primary and secondary weapons, with an elemental weapon/enchantment, a Mystic Knight can perform a duo-element, duo-stat attack, making it one of the highest damage per second skills in the game. For in-depth discussion of tactics and usage, see Abyssal Anguish.

After learning the skill Reflect, good Perfect Block timing after charging the Magick Shield with the Riposte and counter shield skills can greatly improve both one's survivability and damage output. A properly timed block will not only negate damage and stamina use but will also unleash a blast of magick, depending on the shield's current enchantment. (See Mystic Knight Shield Counters.)

Most melee attacks and many magickal attacks can be blocked. The exceptions are a Dragon's firebreath and the spell Exequy. A Perfect Block will also fire a Great Cannon if its sigil is within the frontal arc of the shield.

Finally, the Holy Grace spell on the shield is unique in that it can heal an Arisen past the green healing area when coupled with the Reflect core skill, and a Perfect Block.

The Equipment of the Mystic Knight in the Change Vocation Menu is:

In the Dark Arisen Mystic Knight trailer the Arisen wears: