watch 01:38
What is Midnight Helix?
Do you like this video?
Play Sound

Ward of Regret
Midnight Helix is a location in Dragon's Dogma: Dark Arisen.

Accessed from the Ward of Regret, the Midnight Helix does not connect to other dungeons.

As the name implies, the Midnight Helix is a circular room with wooden bridges, hanging metal cages, numerous Hanging Bodies, and a crumbling staircase that runs up the sides.  A chained Prisoner Gorecyclops is usually found here, together with other foes.

Heading downstairs from the entrance is an area littered with rotting carcasses.

There is a side chamber with a poisonous river running through it, accessible via an opening in the base of the helix. A bridge also crosses this river to a small chest chamber; the bridge can be accessed from the first stone level of the helix itself via an antechamber.

Initially four Skeleton Sorcerers, a Gargoyle, and a chained Prisoner Gorecyclops are found here, in addition to the Leapworms that inhabit the area around the poisonous river. Additionally both a Cursed Dragon and Death may randomly appear here.

Post-Daimon the creatures become more formidable, including Leapworms, three Skeleton Brutes and either a Frostwyrm and four Strigoi or Corrupted Pawns with an unchained Prisoner Gorecyclops.

The top of the helix is the location of a Void Key required to open the locked gate in Duskmoon Tower, which leads to the Vault of Defiled Truth. Additionally, a hanging cage at the top of the helix contains a Macabre Sculpture; another sculpture can be found in the poisoned river.

For chest numbers and item locations refer to the map below 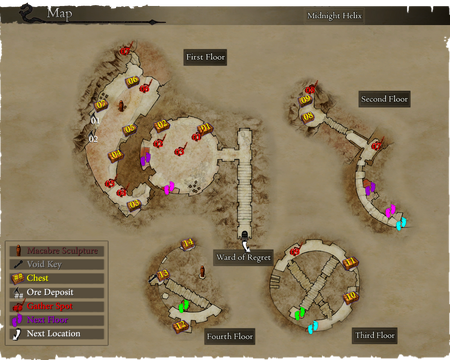 "Better we walked, not ran."

"Let us find an open place with solid ground."

"The footing here is poor."

Retrieved from "https://dragonsdogma.fandom.com/wiki/Midnight_Helix?oldid=323889"
Community content is available under CC-BY-SA unless otherwise noted.