Maximilian Eizenstern is an NPC in Dragon's Dogma.

"A commander of the duke's troops. He is in charge of the Wyrm Hunt. Though he is young, he is a talented man and is whole-heartedly devoted to his liege."

Ser Maximilian Einzenstern is one of the duke's commanders, and the leader of the Wyrm Hunt. Maximilian is not a mover or a shaker in the noble society of Gran Soren. Though he comes from a good house, he's more interested in making sure that the duke's endeavors succeed.

Ser Maximilian can usually be found in the Noble Quarter in Gran Soren, near the castle gate leading to the Duke's Demesne.

Ser Maximilian is entrusted with assigning the Arisen the Wyrm Hunt Quests, which are:

After the Arisen is admitted to the Royal court (Come to Court) he will seek the Arisen's aid in further investigating the cult Salvation in the quest Rise of the Fallen.

Maximillian also has an escort quest, The Mock March. 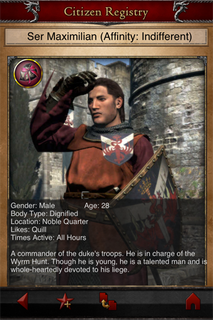 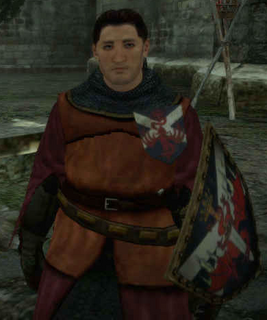 Add a photo to this gallery
Retrieved from "https://dragonsdogma.fandom.com/wiki/Maximilian_Eizenstern?oldid=302391"
Community content is available under CC-BY-SA unless otherwise noted.