Maul is an NPC in Dragon's Dogma.

Maul is the leader of the south-western bandits called the Iron Hammer Bandits and is located in The Ruins of Aernst Castle. He is initially non-hostile, but attacking him will cause him to attack the Arisen in turn, and also make all other bandits in the castle hostile.

Maul values a strong will above all else, and is interested in the Arisen's actions. Despite being a gruff bandit leader, Maul seems to have a soft spot for children, and can show compassion, as witnessed by his actions towards Pike.

Maul wears parts of various Barbarian Armor Sets to show he's an intimidating leader. He wields the weapons of a Ranger but wears the equipment befitting a Warrior.

He may gift a Maul's Badge of Amity if a bond is made with him, but one cannot be obtained by defeating him - instead killing him will get the Arisen a Giant Coin Pouch.

Maul has the same elemental weaknesses as a bandit of the assassin class, but with the high health of warrior - his physical defense however is relatively low. He is a ranger, and in combat Maul is likely to use Gamble Draw. 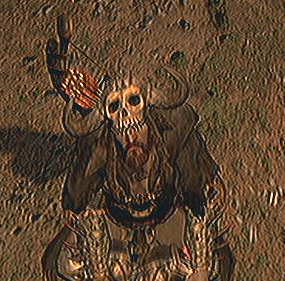 Add a photo to this gallery
Retrieved from "https://dragonsdogma.fandom.com/wiki/Maul?oldid=295701"
Community content is available under CC-BY-SA unless otherwise noted.