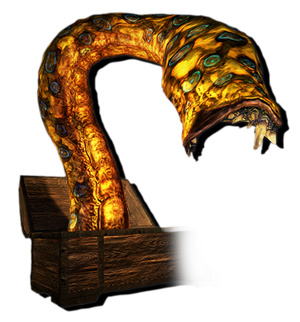 Maneater is an Enemy in Dragon's Dogma: Dark Arisen.

The Maneater is a yellow worm-like creature resembling the tentacles of an Evil Eye. They are dangerous foes that spring out from random chests to eat anyone that dares open the lid to its trap.

Maneaters hide in chests found in Bitterblack Isle. When such a chest is opened, the creature will spring out, grab and try to swallow the opener.

Maneaters have sharp rings of teeth that fill their mouth and are capable of consuming Pawns or the Arisen whole.

In areas where Maneaters occur, only one will appear at any given time (more may occasionally be godsbaned), so all remaining chests will be safe to open once that Maneater is encountered. However, after Daimon has been fought, it is possible for more than one Maneater to spawn on any given area.

A wide variety of persistent of delayed action spells can be used to protect the opener when examining chests - most useful when without pawns :

For full information, refer to the Bestiary page.

In addition to witnessing these techniques, it is necessary for Pawns to participate in killing 45 Maneaters either with their own Arisen or while travelling with others.

"The chest--it's...!" (no bestiary knowledge)
"Watch for those tentacles!"
"Its spittle acts to petrify flesh!"
"Take care you don't become its meal!"
"Be wary! There are beasts that dwell within such chests."
"Beware its spell of death!" 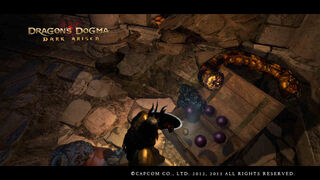 Hexagon shaped loot drop.
Add a photo to this gallery

Retrieved from "https://dragonsdogma.fandom.com/wiki/Maneater?oldid=309325"
Community content is available under CC-BY-SA unless otherwise noted.