Start a Wiki
watch 01:19
'Dragon's Dogma' Lore: Maker's Finger
Do you like this video?

Maker's Finger is an item available in Dragon's Dogma.

The Maker's Finger is a powerful and expensive arrow that can instantly kill most enemies- even minor Dragonkin can be killed with a successful shot, provided the arrow hits their heart.

A few powerful monsters survive a well targeted Maker's Finger shot - these include the Ur-Dragon, and a handful of bosses on Bitterblack Isle, including Death and Daimon - instead the magickal arrow only takes one full health bar, or in the case of the Ur-Dragon - destroys a heart.

Caution! After being equipped, it will be lost even if restoring from checkpoint save, regardless of whether it was used or not. 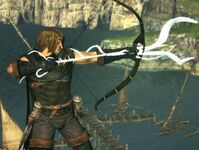 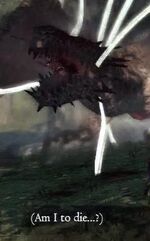 Retrieved from "https://dragonsdogma.fandom.com/wiki/Maker%27s_Finger?oldid=308671"
Community content is available under CC-BY-SA unless otherwise noted.