watch 01:59
What is the Magick Archer?
Do you like this video? 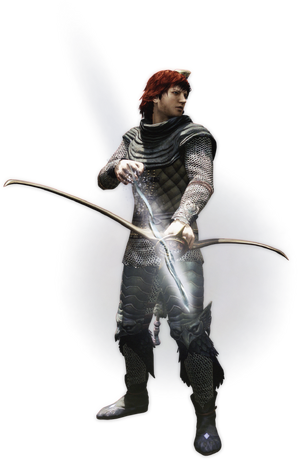 The Magick Archer is one of three Hybrid vocations in Dragon's Dogma. Hybrid vocations are exclusive to the Arisen, and cannot be learnt by Pawns. It costs 1,500 Discipline Points to switch to this vocation.

"A skilled explorer and well-balanced adventurer, able to wield a magick bow."

Magick Archer combines elements of Mage and Strider, allowing it to equip both Daggers and Staves as a primary weapon and has access to some armor and clothing suitable for both bow users and spellcasters. For its secondary weapon, Magick Archer has exclusive access to Magick Bows. Magick Archer has unique offensive and support spells that can be cast from all three weapon types.

Magick Archer, being a hybrid of physical and magickal vocations, has a selection of weapon skills that utilize both Magick and Strength, though it leans more towards magick in terms of abilities.

A Magick Archer can be a powerful attacker in its own right, with access to some extremely effective spells, and the versatility to switch between magick- or strength-based skills and equipment as needed. However, its growth with experience is mostly defensively based, especially in Magick Defense. Magick growth is above average, but Defense growth is low, and Strength mediocre.

Additionally it can be effective as a non-healing support class. Magick Archer is able to provide debilitation resistances, magick power boosts, magick defense boosts, and set magick traps through its spells. It can even provide temporary light sources.

Pawns may not learn the Magick Archer vocation, though some other humans have done so. Ophis wields a Magick Bow, and some other more experience bandits, such as found in the Cursewood and in the Pastona Cavern have mastered the magick bow. Pawn's refer to such enemies as 'Sorcerers'.

In Dark Arisen, Corrupted Pawns in Bitterblack Isle may also be Magick Archers, as seen in The Pilgrim's Gauntlet.

Skills in bold are unique to the Magick Archer.
Skills in italics can only be obtained via Skill Rings and Bands found in Dark Arisen.

The Equipment of the Magick Archer in the Change Vocation Menu is:

There are three armor sets can be said to be Magick Archer specific - the Novice's Armor Set, Raptor Armor Set, and Holy Armor Set. 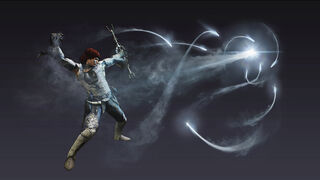 Retrieved from "https://dragonsdogma.fandom.com/wiki/Magick_Archer?oldid=321231"
Community content is available under CC-BY-SA unless otherwise noted.