Start a Wiki
watch 01:43
Who is Madeleine?
Do you like this video?

Madeleine is an NPC in Dragon's Dogma.

Madeleine is a peddler. Abandoned as a child, and raised by nuns, Madeleine seeks money above all else, having come to loathe poverty.

She is first encountered by the Arisen in Cassardis where she seeks an escort to The Encampment, which begins Madeleine's "relationship" with the Arisen. On the surface, this appears to revolve around Madeleine pleading poverty to accrue wealth.

She is later encountered in Gran Soren where she has set up shop in an Abandoned House in the Venery (Madeleine's Shop). Through greed rather than malice she becomes involved in a conspiracy involving Salvation and Julien, providing information to the Knight for gold.

Ultimately, her lack of a moral compass is her undoing and she is sought by the Gran Soren authorities for trading in Salvation's Badges. Forced to flee, she loses (mostly) everything and becomes a peddler once more.

Though somewhat callous and manipulative in her pursuit of wealth, Madeleine is not without humanity, and possibly beneath the facade there is after all a heart of gold.

Madeleine's outfit is the Set of Lady's Trek Wear. She also carries the Divine Razors daggers. 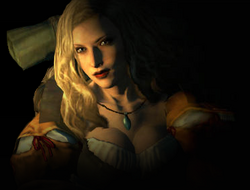 During the main quest :

Post-Game (after The Dragon is slain) :

Madeleine is a travelling Vendor who can be both a peddler and a shopkeeper depending on her career progression.

She sells the same items regardless of her location, gradually expanding her selection over time. As part of the quest Supplier's Demand she seeks rare metal idols, and if given a genuine one will be able to improve her inventory.

For an overview of the numbered stages, see Quests.

Items listed as becoming available via an idol refer to those added to Madeleine's stock after presenting her with a Bronze Idol, Silver Idol or Gold Idol as part of the Supplier's Demand quest.

"Well Madeleine, this is a fine bit of fortune you've come into... Come to Gran Soren with riches in mind...instead find only cravens, cowed by dragon-fear. The streets are chaos, my goods ruined or lost..." (initial monolgue)
"Yes, well, enough idle chatter. To business, then?"
"A girl must take what advantage she can. Don't you agree?"
"Time is a funny thing. It seems only yesterday you smuggled me from Cassardis... Those were hard days, for a certainty... Survival was not a given, let alone with such grace and beauty as I managed, hmm?"

"How good to see you again! You remember me, yes? Madeleine? ...Yes? I hear you've become, what was it...A...Arisen! Important, aren't you now? Such a post must come with benefits, mm? Gold and jewels and the like?"

"But, one moment... Did I not... Ah, just so! You lent me a tidy sum as I fled Cassardis! In truth, I don't recall the exact figure... But worry not -- I shall repay you with all speed! ...Just as soon as my shop turns a profit. I may enjoy the jingle of coin more than most, but I'm not one to ignore a debt. "

"A knightly customer? Oh, we get all kinds in here, Arisen, but how is it your business? Surely 'tis not jealously steers your questions? Oh, fie! You needn't worry on that account! I have eyes only for the purses of any what pass through that door."

"That knight comes here with some regularity. He asked the names of those who purchased the rare medallions I came upon not long ago. His reward was impressive to say the least. I speak of money, fool! Not...other things! Fie, but your jealously is a thing to behold."

Fields. After the Final Battle

"These are dark days, so terrible as to drive even I to brink of tears. But you've come to shop, not hear me prattle on! Let's to business."

"There is a small abbey in central Gransys which has never been known as anything more than “the abbey.” A number of sisters live frugal, modest lives in the abbey. These sisters are ardent followers of the Faith, kind and benevolent, and deeply relied upon by the people. Knowing that the sisters would never abandon a child, young babes were sometimes left on the steps of the abbey. Madeleine was just such a child.

Madeleine was raised as an orphan by the sisters, but in complete contrast to her gentle guardians, she came to hate being poor and to hate modest living. While she was grateful to the sisters for raising her, she also vowed that she would never serve the Faith as they did."
―Madeleine's Tale.[1]

Retrieved from "https://dragonsdogma.fandom.com/wiki/Madeleine?oldid=315697"
Community content is available under CC-BY-SA unless otherwise noted.