Start a Wiki
watch 01:36
'Dragon's Dogma' Lore: Macabre Sculpture Locations
Do you like this video?

There are 30 Macabre Sculptures scattered around Bitterblack Isle in various obscure, hidden, or hard to reach locations.

Found in the Bitterblack Isle Harbor on a rocky island in the sea to the southeast of the pier.

This sculpture is available on the first visit to the island, but only with those with advanced jumping skills. First jump onto the shortest pillar nearest to the island. Then, from the pillar, either use Levitate, or Double Vault with Sunflare, or a jump combined with Sky Rapture to reach the island. (It is just possible to reach the island with a running start followed by a double jump, but the jump is extremely difficult to carry off without falling into the brine).

There is a much easier alternative route once the entirety of Bitterblack Isle has been traversed - from near the exit drop down onto the broken arcade of pillars and arches just outside the main entrance on the east side. Then an easy jump leads to a rock ledge running round the eastern side of the open area before the entrance - two further easy jumps can be made from the ledge to get to the rock island.

Found in the Bitterblack Isle Harbor

At the top of column just left of portcrystals - access upper levels on the east with Levitate or Double Vault.

Found in the Garden of Ignominy

On the second floor of southern spider room, on top of large stone blocks.

Found in the Duskmoon Tower

On top of an angled pillar of rock against wall next to SW gem doors.

Found in the Duskmoon Tower

At the very right- angled corner of an upper ledge in east - on the roof of the building/door that leads to the Ward of Regret.

Found in the Rotunda of Dread

On a block just west of NW torch.

Found in the Ward of Regret

First ledge to the left in the catacomb area after going through the hole in the wall near the water on the lower level. Appears directly in front of where you encounter the Skeleton Brute and later on the Golden Knight and Silver Knight or Living Armor.

Found in the Midnight Helix

In the uppermost hanging cage - use Levitate to reach or grab a winged enemy.

You may also double vault up to the body nearest the cage (slightly above it) and double vault over to the cage.

Note: there is another way to reach it that can be tricky. You can grab one of the hanging bodies and start to attack it. It will begin to swing in wide circles. Hitting release at the proper time can send you into the cage.

Double Vault or Levitate can be used to better control yourself midair after jumping from the body.

The simplest way to reach the cage is by Levitating to the small platform where chest 14 is located—refer to the Midnight Helix section. Then levitate from that platform to the nearby hanging cage.

Found in the Midnight Helix

In the red fouled water in the NW beside the wooden posts of the bridge standing above you.

Found in the Vault of Defiled Truth

In the upper level of southern most room on top of a wooden rafter.

Found in the Gutter of Misery

Southern sewer drain - accessed through hole in bars and roots.

Found in the Warriors' Respite

On top of column/pillar south of fountain - partly hidden by vines.

Climb up the water spout and onto the ledge above

Found in the Shrine of Futile Truths

In the middle of a bush around the circular area in the center of the room.

Found in the Corridor of Emptiness

Found in the Fortress of Remembrance

(Successive playthroughs): As succubi are replaced with other enemies, instead grab and carry a strigoi from the entrance from the Corridor of Emptiness to about halfway between the tower and the door to The Pilgrim's Gauntlet. Don't try to bring it to the tower, otherwise it will disappear and return to its spawn point. As it takes off, grab it and guide it to the tower. It may take several tries. To get the strigoi, climb the ladder and wait for one to attack. Once engaged, ground and carry it, putting it down and picking it back up when it struggles.

(Ogre approach): Go lower in the tower and summon an Elder Ogre with Rancid Bait Meat. Next lure him up the tower and jump off him, Magick Archers can use Double Vault, Sunflare to reach to the ledge. A similar method also works with Poisoned Undead - use Instant Reset mid-air as soon as reaching the ledge with Sunflare, otherwise the animation will continue through and the character won't grab a hold of the ledge. There is also a cursed item on the high ledge.

(Barrel & Leaping Stone): In the absence of any enemies to climb on or be carried by, barrels may be stacked to reach the top of the tower. Pawns most certainly will break the barrels though. Alternatively, a suitably placed barrel can be used as a lift off point for the Strider skill Leaping Stone.

Found in the Fortress of Remembrance

Fourth Level Underground. Go all the way to the west, past the room with two chests. Facing the bottom of the large bridge above, climb the mound of rocks to the right of the bridge - there's a mining spot there for reference - the Sculpture appears there. Levitate or Double Vault is recommended, or a really fast (but painful) jump off the right side of the second level bridge near the door.

Found in The Black Abbey

On an upper ledge just left of the entrance into the area. 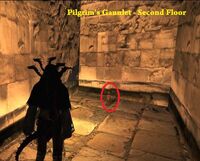 Found in The Pilgrim's Gauntlet

In the central area in the upper balcony alcove. There is a big balcony that hangs over the north side of the room. The only way to obtain it is by using Double Vault from the east upper balcony up this slanted boulder and jump from there on to the balcony. On the opposite side is an "alcove", jump from the balcony to the "alcove." Levitate can also be used to reach the "alcove".

Found in The Pilgrim's Gauntlet

Climb up to the top of the tunnel shaft in the north end.

Found in the Tower of Treasons Repaid

On the fourth level jail cell hidden in straw pile.

Found in the Forsaken Cathedral

In the second room (before spiral staircase) next to some stocks.

Found in the Corridor of the Hallowed

On the ledge on the left when about to go down past spiders into the next area. The sculpture sits close to a statue with water coming out of its mouth.

Found in the Rotwood Depository

Found on the first floor, placed on a shelf next to the bunk beds.

Found in The Forgotten Hall

On the balcony railing on which there are often spiders in the east.

Found in The Bloodless Stockade

On the second floor on the northwest ledge above the staircase that goes down.

Found in the Arisen's Refuge

In the lower level behind a bookcase accessed by destroying stuff blocking the way.

Found in the Sparyard of Scant Mercy

Behind the last of the fully connected pillar posts.

Found in The Fallen City

In the fountain in the northeast.

Found in The Fallen City

In a southwestern pile of hay. It's on a rooftop.

Found in the Sanctum

Behind a pot on the right just before entering the gated door to Daimon.

Retrieved from "https://dragonsdogma.fandom.com/wiki/Macabre_Sculpture_Locations?oldid=303743"
Community content is available under CC-BY-SA unless otherwise noted.