Start a Wiki
watch 02:05
'Dragon's Dogma' Walkthrough: Lost and Found
Do you like this video?

Lost and Found is a quest available in Dragon's Dogma.

"News of Quina's sudden disappearance has left you shaken. Seek out the village chief to learn more of her whereabouts."

The Arisen's childhood friend Quina has gone missing.  Return her safely to Cassardis.

Caution! Be sure to complete this quest before completing Lure of the Abyss, as the quest is failed on completion of that task.

There is a note left by Quina in Chief Adaro's House.  The brief message gives some indication of Quina's likely destination, and perhaps her motiviations. Other Cassardians can be consulted to try to get a better picture of what happened.

Make for the Witchwood

During the journey to the Witchwood, some challenging enemies will likely be encountered. Take the opportunity in Cassardis and in the Encampment to acquire new skills and equipment, if possible, before setting out.

To reach the Witchwood, travel beyond The Encampment and take a left at the fork on Manamia Trail. Be ready to fight Wolves here. Walk up the mountain by following the trail. At the top of the mountain lies a large Boulder accompanied by two smaller ones. Upon approach, the boulders will come tumbling down the path, so be certain to avoid them.

At the top of the mountain there is a group of Bandits. Dispatch them and follow the path south, hugging the mountain to the left.

More Bandits and Wolves lie in wait, but they may be bypassed by running into the white mist of the Witchwood; it will automatically move the party into the new area.

Upon entering the woods, a short scene shows Quina further down the path. She will ask the Arisen to accompany her to the Witch's House.

Seek Out the Witch

The witch Quina seeks is in the center of the woods. The fog in this area is magickal, and may be removed by destroying glowing Fog Talismans found throughout the Witchwood. The first one is found a little further down the path, directly across the creek. The in-game maps will show nothing but fog until the nearest talisman's magickal influence is destroyed.

If pawns have prior knowledge of this quest, they will be of good help in finding the Witch's House, otherwise proceed methodically and carefully.

Quina guides the way, at first walking towards the creek. Follow her and then continue down the path, and destroy the first fog talisman. There are three more fog talismans to destroy, but they do not need to be shattered in order to reach the Witch's House.

Finding the right path might prove tricky. A way to navigate this part of the woods is to keep to the left following the path until reaching a fallen tree acting as a natural bridge above the road. When this tree is in sight, go left into the brush, but do not go under the tree. There will be a boulder which can be used to climb up to the fallen tree.

Use the tree to cross over the road. At its roots will be a Large Coin Pouch. Beware of lunging wolves in the area as they might attack Quina. There are also Spiders around which can inflict Poison and Torpor.

Quina will assist in combat with Anodyne and Ingle. She will heal the party if one party member falls below 50% health, but she will not heal herself if she is the only one injured.

Once across the fallen tree, take a left (south on the minimap) and follow the path heading south-east. The last fog talisman is found hanging in a tree to the right; take care for there is a Wolf ambush that will trigger when approaching this talisman. Continue on this path until the Witch's House is reached.

Approach the Witch's House through the clearing and a short scene triggers where Quina points out that this is the place she's been looking for. Take the wooden stairs up to the cottage and go inside. Another cutscene will trigger.

Report Back to the Village Chief

After the cutscene, Quina will return to Cassardis alone. Before following her, search the house. Several potions lie about, the chest will contain either a Ring of Gules, a Ring of Azure or a Thunderclap, and a Bronze Idol sits on a nearby window sill.

Exit the cottage to see Quina running north along a hidden path, which leads to a shortcut overlooking the Seabreeze Trail and Cassardis. The chest on this overlook contains a Wooden Wall, a Two-Hander or a Scholar's Cape. Jump down and go back to Cassardis.

Once there, speak to Chief Adaro to complete the quest.

This quest is the prerequisite to a later quest called Witch Hunt, which involves going back to the Witchwood. Failing to complete Lost and Found will prevent Witch Hunt from initiating. 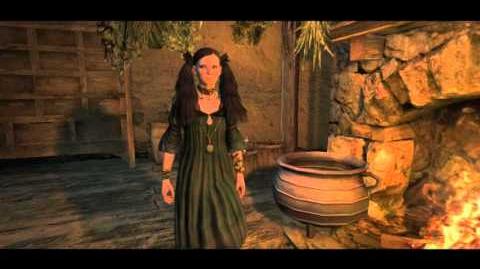 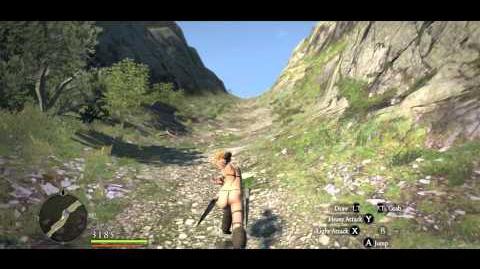 Retrieved from "https://dragonsdogma.fandom.com/wiki/Lost_and_Found?oldid=308420"
Community content is available under CC-BY-SA unless otherwise noted.