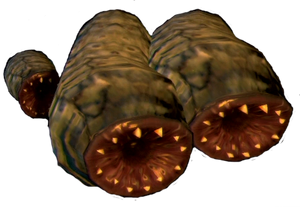 The Leapworm is an Enemy in Dragon's Dogma: Dark Arisen.

Leapworms are commonly found on Bitterblack Isle. These small critters seem to prefer dark and humid places and can be encountered in confined spaces such as sewers and passageways. Leapworms hide in piles of bones and behind chests and crates until a target approaches, they will then all of a sudden leap forward or fall from the ceiling and ambush them.

Leapworms attack with a short jump and bite that can inflict Lowered Defense. Their blood-spray upon death inflicts this debilitation as well.

Retrieved from "https://dragonsdogma.fandom.com/wiki/Leapworm?oldid=313342"
Community content is available under CC-BY-SA unless otherwise noted.