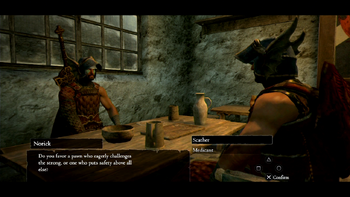 The Knowledge Chair enables the Arisen to change their Main Pawn's secondary inclination, and alter their talkativeness and manner of speech.

Knowledge Chairs are distinctively-designed wooden chairs in which the Arisen can sit and talk tactics and other matters with their pawn.

There are chairs at Pablos' Inn, the Union Inn, the Pawn Guild, and at every rest camp. To begin, simply sit in the chair and answer the pawn's queries.

Usually three questions will be asked, sometimes only two.

Choosing Medicant swaps the two inclinations whilst choosing Scather leaves things as they were.

Occasionally a main pawn will only have one (primary) inclination and no secondary - in this case the pawn may ask if their current behavior is acceptable (e.g. "I am prudent in battle, ever working to avoid danger. Does this please you Arisen"), with "yes"/"no" given as response options.

The optional second question affects a pawn's talkativeness. There are times however when this question will not be asked. This question is often oddly worded, though it may be couched in different terms.

The common form is slightly ambiguous:

Here "yes" means talk more, and "no" means talk less - the pawn will indicate what they interpreted the answer to mean on being given it.

There are six questions, and answer responses come it two sets. Sometimes a pawn will ask two questions of this type.

Pawns give an choice of four nuances, or to stay the same - the two sets of four choices are "Confident", "Meek", "Arrogant", or "Ordinary"; or "Timid", "Aggressive", "Reticent", or "Ordinary".

Retrieved from "https://dragonsdogma.fandom.com/wiki/Knowledge_Chair?oldid=306628"
Community content is available under CC-BY-SA unless otherwise noted.