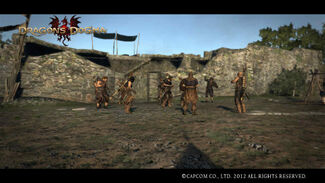 The Iron Hammer Bandits are a group of male bandits led by Maul. They are holed up in The Ruins of Aernst Castle in south Gransys in an area called the Vestad Hills. The Iron Hammer's arch rivals are the members of the female gang named the Westron Labrys Bandits.

Bandits inside the castle can usually be relied upon to not turn hostile if not attacked first, though their manner and tone are rough with the Arisen. Other bandits outside the castle within the Vestad Hills are part of the same clan, but are hostile at all times.

This group consists of Striders and Fighters, and some Assassins armed with sword and shield. Their armor sets share many similarities with the Barbarian Armor Sets, and utilize clothing unique only to their clan such as the Guardian's Hood, Horned Helm, Faded Vest, Hide Armor, and Meloirean Cyclops Veil.

All of Maul's close associates have escort quests, which generally give special arrows as reward. They can be given Affinity items, and romanced, and may become the Arisen's Beloved.

All of these bandits may be coaxed into an escort quest (or romance). A bandit's favorite gift is a skull. Their escort quests will be made available via the notice board in Gran Soren's Union Inn. Maul's and Pike's escorts will only become available after the Duke opens the treasure room at the end of Reward and Responsibility; the others are all available as soon as you finish Lure of the Abyss.

"I did not ask to become leader of this band of thieves. Nevertheless, it is my birthright and one I've embraced with open arms. As a bandit and a man, I make my own path. I've been on the run for longer than you've been alive, with no intention of getting caught. Every month or so the duke sends some weak-boned adolescent to try and oust us from the ruins, and every month we return him to his superiors relieved of his wallet and his dignity. We wonder if they'll ever learn."
―Maul, Leader of the Iron Hammer Bandits[1]

Retrieved from "https://dragonsdogma.fandom.com/wiki/Iron_Hammer_Bandits?oldid=313995"
Community content is available under CC-BY-SA unless otherwise noted.