Hydra is an Enemy in Dragon's Dogma.

"Even the bravest man would surely gasp at the sight of the great, demonic serpent that is the hydra. The black scales that cover its body seem to beckon ill luck and the body that stretches well over a hundred feet splits at last into four horrible heads.

The trouble lies in the fact that those four heads each possesses a mind of its own and will act against you independently if you approach it as an enemy. Even one of the heads would be a formidable enemy, so it is probably easy to imagine the threat that four can pose when attacking simultaneously.

The hydra has great size and dreadful strength, but its intelligence is on par with its reptilian appearance. In the end, its destructive tendencies and various attacks are nothing more than the result of base instinct.

The hydra possesses such horrifying life force that it can even regenerate its heads if they are cut off once."
―Capcom official description [1]

Striking at the head, preferably with cutting weapons may remove a head, leaving an uncontrolled stump. Searing the stumps with Fire delays regeneration.

An alternative way to destroy a Hydra head is by using an Explosive Barrel; when thrown at the right moment, one of the Hydra's heads will swallow it. Shooting or striking the bulging throat will trigger an explosion. If done correctly, the head that swallowed the barrel will both take massive damage from the explosion and cauterize the wound to prevent regeneration.

The Hydra faced in the Encampment does not die when the Arisen takes its head in the early game; it flees. The Hydra can be fought later during the Post-Game in the Proving Grounds as part of the quest A Challenge. After the quest is complete, the Hydra will respawn after three days like all boss monsters.

In addition to witnessing these techniques, it is necessary for Pawns to participate in killing 7 Hydras either with their own Arisen or while travelling with others.

Throwing an explosive barrel in the Hydra's mouth and then shooting the barrel with an arrow will decapitate a head, can be difficult to do, but is required for the Bestiary knowledge.

To illustrate, after sufficient attacks (lightning is especially useful), a Hydra's head can be stunned, with its head swaying slightly above the ground and its mouth open for about 15 seconds. During this moment, grab an explosive barrel, walk close to the head, and throw it towards the opened mouth. The head will immediately swallow it, bulging the throat as the barrel moves slowly down the neck over about a minute and a half. During this time, attacking the bulge with an arrow will explode the barrel, tearing off the head and sealing the wound with flame. Be sure not to jump when throwing the barrel towards the Hydra head (even though there seems to be a need for jumping), or the barrel will simply explode in its face instead of getting swallowed by the head.

Witnessing the 'barrel throw' at least 2 to 3 times is required for the Bestiary knowledge. The Encampment Hydra encounter can be repeated quickly by switching difficulty to Hard Mode and back (resetting the game progress but not losing character development). This is repetitious, but Mercedes' assistance in the cutscene is much easier than throwing the barrels manually when fighting the Hydra or Archydra.

NB When shooting the neck, be sure to use the "Come" command, to ensure pawns are close enough to witness the event and gain bestiary knowledge.

"Nothing should have that many heads!" (no Bestiary knowledge)

"Cut deep enough and we'll cleave that head off!"

"Its scales make a mockery of our weapons!"

"Hack the heads off and it's a common snake!"

"If this keeps up we're done for!"

"Its tail is a mighty whip! Beware!"

"The curs fear a flame!" 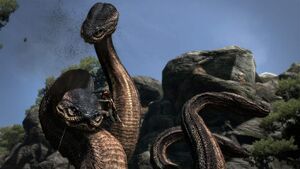 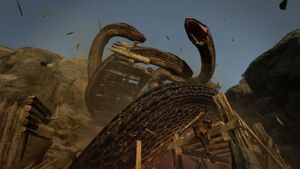 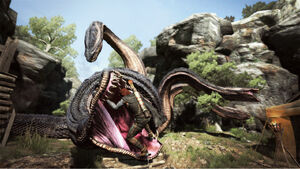 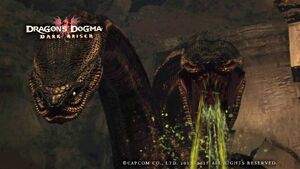 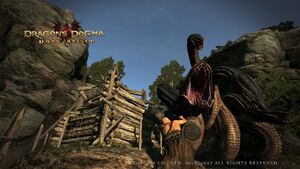 Feeding Explosive Barrel to Hydra
Add a photo to this gallery

Retrieved from "https://dragonsdogma.fandom.com/wiki/Hydra?oldid=323199"
Community content is available under CC-BY-SA unless otherwise noted.