Howlen is an NPC in Dragon's Dogma.

"A carpenter from Gran Soren. He likes to talk, but he never lets that get in the way of his work."

"Many fled the city when tale of the Dragon spread. But not Howlen!"
"By the Maker, it'll take more than one scaly bugger to turn me craven."

"Perchance you bore witness to the dragon's attack on the village, then?"
"The lodges in Cassardis are of a simpler make than those here, no doubt."
"It pains me to think of the devastation the wyrm must have wrought."

"I hear tell most of Cassardis escaped the Dragon's wrath?"
"Perhaps the rumors have some truth to them, after all..."
"They say the wyrm's more capable than just any wild beast, and picks its targets like apples from a tree."
"It's also said that after each attack, the beast takes shelter, biding its days until its strength returns..."
"Could mean we needn't work on another Dragon strike... For a time, at least..." 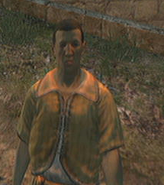 Add a photo to this gallery
Retrieved from "https://dragonsdogma.fandom.com/wiki/Howlen?oldid=281023"
Community content is available under CC-BY-SA unless otherwise noted.