The Mysterious Missive / The Cypher / The Dragon's Tongue

Hillfigure Knoll is a location in Dragon's Dogma.

Hillfigure Knoll is an area in the northern wilderness that is noted for having a large figure cut into the hillside. It's a landmark that seems quite strange, and people who stop there speak of a man call The Fool. He's said to speak in riddles, confusing those who would hear him out. Perhaps the Arisen can learn more than most from this curious place.

The Dragonforged also lives here, supposedly visible to only the Arisen.

The hill itself is a large area of open and grassy elevated ground within Northface Forest - in parts the turf has been removed marking out the figure of a fighter with spear and shield, with a scar on their chest.

To the east is an Abandoned Campsite, whilst the hill overlooks the Conquest Road to the southeast that travels north towards The Blighted Manse and The Bluemoon Tower.

There are few enemies directly in this vicinity, except at night when Undead Warriors rise up from the ground in higher parts of the Hillfigure drawing. The fringes of the hill are dangerously inhabited by Direwolves, Snow Harpies, and, at the campsite, Bandits. Furthermore, occasionally a Griffin will take up hunt here, and if it spots the Arisen's party, may attack them, even close to the cave.

The Standing Stones and Cave

Just to the west of the Hillfigure is a collection of standing stones - this collection of giant rocks includes a dolmen, and some stone spires. Beneath one giant rough hewn lintel partially buried in the hillside, is a passageway leading down into the ground, to a cave - the home of an Arisen, The Dragonforged, and his pawn The Fool.

The Dragonforged's cave is an irregular ovoid cavity several yards beneath the surface of the hill - there are some rock cut steps, but it appears at least partly natural. A short passage in the main chamber leads a little further downward to a small side chamber containing a chest.

There are inscriptions on the walls of the cave - most are swirling or spiralled patterns of unknown meaning. Two spots contain readable messages - one says "Seek the spear aimed at the hilltop sky."

The inside of the cave is safe, and the Dragonforged and Fool pose no threat.

For loot above ground and in the general area see Northface Forest § Loot.

At the tip of the spear on Hillfigure Knoll there is a small spot where items may be gathered. This pile contains the Signs of Valor daggers. The heart of the figure oft contains a Wakestone Shard.

The cave contains a number of curatives and potions scattered about, gather spots also yield potions or fabrics, and occasionally strategy scrolls. Initially, a Bronze Idol may be found. Ferrystones are also found here and in the lower chamber.

The Dragonforged is not just a source of knowledge, but his cave is too. Various strategy scrolls can oft be found in gather spots in book piles or elsewhere within the cave - these spots have very good chances of giving scrolls as specific points in the main quest :

In Dark Arisen, a single Portcrystal can be found here.

In addition to the quests involving the Dragonforged, the Hillfigure at the knoll is the destination for several escort quests. For more guidance, see Escort Quest Walkthroughs.

"There's something drawn on the hill..."

"Perhaps the figure serves as a beacon, to bring people of a kind together."

"They say in times long past such hilfigures were not uncommon."

"The hill bears the likeness of a warrior who arose against the wyrm."

"The heart of that grand figure may hold some secret..." 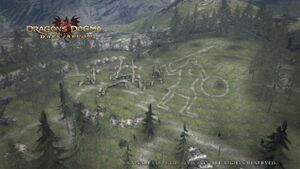 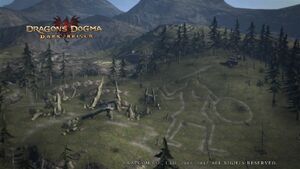 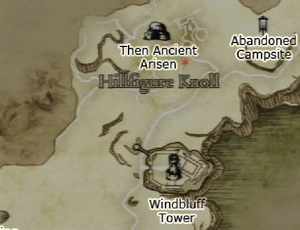 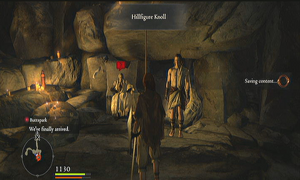 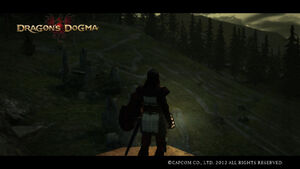 View from the dolmen
Add a photo to this gallery
Retrieved from "https://dragonsdogma.fandom.com/wiki/Hillfigure_Knoll?oldid=318350"
Community content is available under CC-BY-SA unless otherwise noted.