High Ingle is a fire based skill available in Dragon's Dogma.

"An advanced form of Ingle that looses a number of fiery projectiles that explode on contact."

An advanced version of Ingle, which becomes Grand Ingle with a suitable Staff-Bearer's Ring or Band equipped.

Each fireball deals elemental Fire damage with a chance to inflict Burning and Stagger or Knockdown. The spell has a two-stage effect : 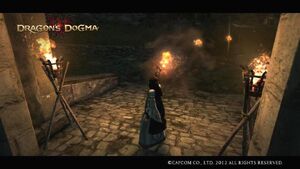 Add a photo to this gallery
Retrieved from "https://dragonsdogma.fandom.com/wiki/High_Ingle?oldid=317483"
Community content is available under CC-BY-SA unless otherwise noted.