High Halidom is a holy based skill available in Dragon's Dogma.

"Invokes a long-lasting sigil which clears all debilitations but Drenching, Tarring, Petrification and lowered attributes."

An advanced form of Halidom whose sigil persists for a longer period of time and cures Blind, Curse, Possession, Sleep, and Skill Stifling in addition to Poison, Torpor, Silence, Burning, and Frozen. 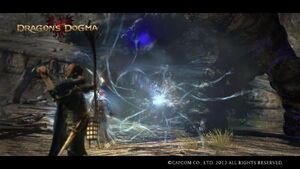 Add a photo to this gallery
Retrieved from "https://dragonsdogma.fandom.com/wiki/High_Halidom?oldid=311863"
Community content is available under CC-BY-SA unless otherwise noted.