Heraldo is an NPC in Dragon's Dogma.

"A Villager from Cassardis. Originally from the mainland, he is well versed in the terrain of Gransys thanks to his move to the village."

Usually seen working at Heraldo's Grocery his grocery store in Cassardis or walking through the village main street in the morning. Though he owns a shop he has nothing of use to sell the Arisen.

Heraldo is fairly familiar with the Arisen, and will have something to say, or an opinion to give, at various junctures.

"I came here from the mainland, I did. Did a fair bit of wandering along the way, too, so I'm well familiar with the lay of the land."

"If you leave the capital and set out around the gulf, you'll happen on a henge. It sits atop a hill that bears the image of a man, carved large into the ground. Atop that hill was the most curious fellow. The Fool of the Henge, they call him. Each day I passed, he'd be there, just sitting. Like as not, he's sat there still."

"Far past that henged hill, well around the gulf from Gran Soren, I caught sight of a tower. Same one you can see from here, now I think of it."
"Never been out as far as the tower, myself. Half wish I had, now there's a fair chance the dragon will tear it down."
"I talk of towers; it's just as likely the dragon will come for me." 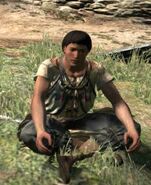 Retrieved from "https://dragonsdogma.fandom.com/wiki/Heraldo?oldid=304133"
Community content is available under CC-BY-SA unless otherwise noted.