Health is a primary Stat that represents a character or creature's ability to take damage - it can be reduced by physical or magickal attacks, poisons, or long falls; and can be restored by eating foods, restorative potions, and some magicks.

When health drops to zero people including the Arisen die (but can be revived by a Wakestone), and pawns become Unconscious.

This figure represents how much damage the character can take as a naked person. With more Health the character is more resilient and can absorb more damage before death.

Damage to health is divided into two determining factors:

When a character suffers from both direct and indirect health damage, using a curing item will heal the maximum amount it can starting at the indirect health portion. Thus if the player wishes to conserve one's Curatives, it is prudent to use curative Magick first to heal the grey-indicated damage and then use Curatives to heal the rest.

The amount of damage a character receives in combat is affected by equipment on the body and the character's Defense and/or Magick Defense stat. Whether suffering direct or indirect health damage, once the amount of health reaches 0, the character dies. Some augments increase maximum health or or aid its regeneration :

Health increases as a character levels, and is highest, in order, when leveling up as Warrior, Fighter, Mystic Knight, with Strider having average growth.  All other vocations have below average Health growth.

Some rare equipment slight boosts health or heals when worn. The Savior Ring increases health by 500.

When health falls below three tenths (30%) of maximum - "Critical Health" - the health bar turns red, and for the Arisen, the screen turns 'bloodshot' at the edges. Also known as "Red Health".

Additionally some weapons with Dark Arisen Bonus Enhancements have special effects activated when health is critical.

Health is represented by a green bar - both in the in game HUD, and in menus - when health falls below one third of maximum (critical health) the health bar will turn red, together with other visual and auditory cues that health is low. 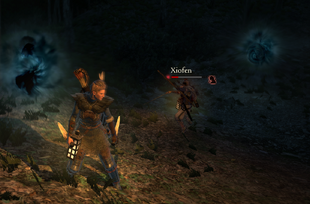 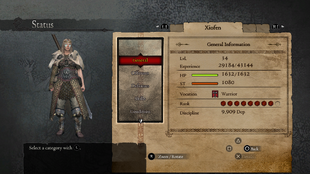 Displayed in the Status menu 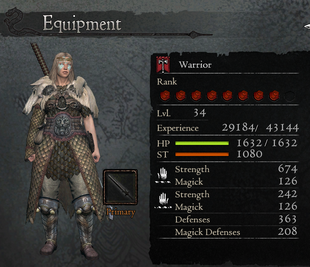 Displayed in the Equipment menu

Retrieved from "https://dragonsdogma.fandom.com/wiki/Health?oldid=321679"
Community content is available under CC-BY-SA unless otherwise noted.