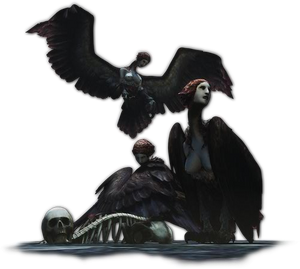 Harpy is an Enemy in Dragon's Dogma.

"From the tops of their lustrous heads to the curves of their bodies, harpies take the form of bewitching beauties, yet the wings and haunches of these creatures are those of a beast.

Harpies have a wingspan of nearly twenty feet and they have an undeniable grace when in flight. Their intelligence is that which you would expect from an animal, yet they are known to sing arias of such beauty that none can say whether the songs contain real language or nothing more than the simple cries of a beast.

Like most birds, they seem to have poor perception at night and avoid taking action during the dark hours, preferring to take their rest upon some safe perch. Yet there have been tales of harpies attacking by the light of the moon or the fiery glow of torches, so it will not pay to let your guard down at night.

The harpy’s song clouds human minds and lulls them into sleep. Once one harpy begins to sing, the others are likely to join in its song, so keep an ear open."
―Official Capcom description[1]

Harpies are winged flying beasts with the body, legs and wings of a large bird such as a condor or vulture, but with the face of a beautiful woman. They do not speak though their song affects humans, lulling them to sleep. They will attack any who come near by gouging or knocking down with their claws or they may also grab a human victim and lift them to great height, before dropping them, usually to their death.

A stronger form of Harpy, the Snow Harpy is the region specific sub-species in colder climes; it possesses an icy breath that may freeze. Related species are the Succubi and Sirens.

As well as grabbing prey, Harpies themselves can be grabbed when in flight, and used to lift or carry a person to a high place or across a gap. Since the Harpy will attempt to free itself, this pursuit can be dangerous.

The Harpy can be made to fly in a chosen direction by pointing in that direction. Weight affects the Harpy's flight so larger heavier characters may not get far. Lighter Arisen appear to travel further or faster.(verify)

Pawns often suggest grabbing onto a Harpy at the Barta Crags to cross the Miasmic Swamp, but this feat is not recommended - it is very unlikely the journey will be that long - generally the distance traveled is not great- but can help in reaching certain high places - such as the locations of Badge of Vows 97 or Badge of Vows 95.

In addition to witnessing these techniques, it is necessary for Pawns to participate in killing 300 Harpies either with their own Arisen or while traveling with others.

"A woman...?"
"A fiend with woman's form!" (no bestiary knowledge)
"There, Master! Harpies!"
"Strike, lest the harpy sing!"
"Slay them afore they can use their voice!"
"Burn their wings!"
"Don't let them drag you off!"
"Harpies!"
"Beware the harpy's song!"
"Focus your attacks as it hovers."
"Ignore the comely face -- those talons bite deep!"

Retrieved from "https://dragonsdogma.fandom.com/wiki/Harpy?oldid=316587"
Community content is available under CC-BY-SA unless otherwise noted.