Gutter of Misery is a location in Dragon's Dogma: Dark Arisen.

Initially accessed from the Vault of Defiled Truth, the Gutter of Misery connects to the Shrine of Futile Truths wherein is the lair of a Gazer.

The Gutter of Misery comprises a stairwell area, the entrance to The Warriors' Respite, and a second area that resembles a winding sewer. At the end of the winding sewer is a door leading to the Shrine of Futile Truths.

Foes found here include Maneaters and Leapworms. A random encounter with an Elder Ogre or Death may happen here.

Gratings around here, both ground and in the outlets, have gather spots that may yield: Giant Rank Fish, Large Rank Fish, Rift Cluster or, rarely, Rift Bicrystal.

Also loose small amounts of Rift Crystals: by the grate west from chest 11 and at the sill near chest 1.

The broken grate behind chest 12 leads to a hazardous area of roots and heights that holds a Macabre Sculpture inside a pipe exit at its end.

For chest locations and loot see the map and table below 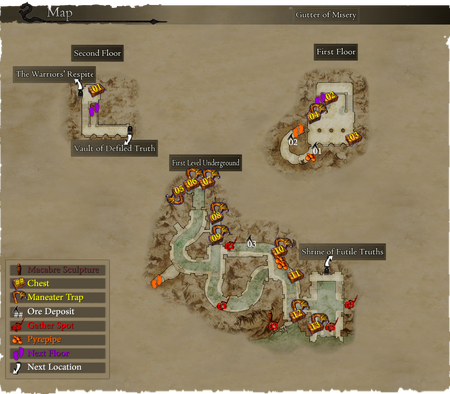 "A sewer used in times long past, perhaps."

Retrieved from "https://dragonsdogma.fandom.com/wiki/Gutter_of_Misery?oldid=317514"
Community content is available under CC-BY-SA unless otherwise noted.