Sidequest
Guard Duty is a quest available in Dragon's Dogma.

"Madeleine the merchant seeks safe passage to the encampment. You hope to earn something worthy from this escort duty."

Escort Madeleine to The Encampment and try not to lose her.

Guard Duty becomes available after speaking to Madeleine at Pablos' Inn. She generally appears shortly after the quest Call of the Arisen has been completed at the Encampment.

Once this prerequisite has been met, return to Cassardis and enter Pablos' Inn and Madeleine will be there, loudly talking to herself. Speak to her and she will ask to be escorted to the Encampment.

Simply follow the road to the Encampment and protect her from any Goblins in the area. Despite her safety concerns, Madeleine has a knack for wandering off to look at something that caught her eye, but will eventually continue ahead. She may do this several times so try not get too far ahead of her.

After arriving at the Encampment, Madeleine will ask for 1,000 Gold to enable her to continue her 'business'. She claims to need it to be able to travel to the capital and promises to eventually repay it, in the form of a small discount at her shop.

Giving her the money will raise her Affinity level. Before leaving her, the player can take a look at the goods she sells (see Madeleine's Shop for her inventory). 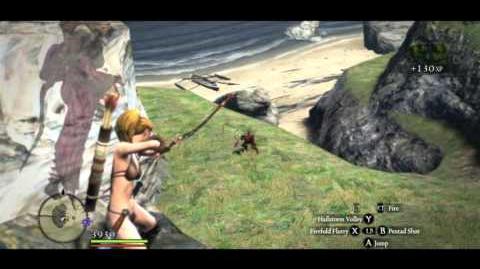 "All prepared to escort her, Arisen?"

"Flightier than a songbird, this girl..."

"I yet cannot fathom how you drove that terrible wyrm from the village..."

"That dragon has ill timing for true. I was near to closing several deals in Gran Soren when it struck."

"You should pursue a future yourself in the capital, you know. One who can face down a dragon would find no shortage of clients."

"Tis a shame monsters forced the mountain pass what leads there closed... We have the dragon to thank for that as well!

"I make for the encampment to speak with the guard captain, and learn when they will reopen the pass."

"True, there are other ways to the capital. Other paths... But enough idle chatter. We should move."

Retrieved from "https://dragonsdogma.fandom.com/wiki/Guard_Duty?oldid=315698"
Community content is available under CC-BY-SA unless otherwise noted.