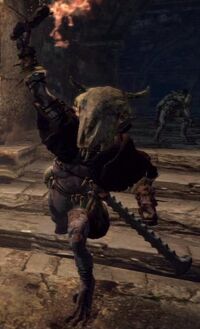 Grimgoblin is an Enemy in Dragon's Dogma.

Grimgoblins are a much stronger and more aggressive version of the regular Goblin and Hobgoblin. They can be found throughout Gransys during Post-Game and also on Bitterblack Isle.

They come in two different variations: The smaller Grimgoblins fight nearly naked, save for a covering of blood splatters and some skull charms, the larger Hobgoblin sized Grimgoblins are better armored and often wear a helmet made of an animal skull; their skin has a sickly grey colour. Both are better prepared for combat than their lesser counterparts - they often carry serrated swords similar in design to the Cassardi Flamberge. They are also more resistant to staggering allowing them to ignore attacks to hit their foes.

Grimgoblins are not to be taken lightly and will abuse the situation, such as stomping on foes that are knocked down. They have been known to work in teams and will try to keep their foes from getting up.

Grimgoblins are vulnerable to Torpor and Tarred, but not to Blind; they are weak to Ice.

Grimgoblins have access to different thrown items than other Goblins:

Grimgoblins throw an object that may cause thundershock - on contact or miss this produces an electrical discharge on impact - it seems likely that this has some connection to the Astracite Shard sometimes obtained from dead Grimgoblins (Astracite is usually obtained from Phantasms).

On occasion, pawns fighting Grimgoblins will exclaim "Beware! They ready a slumberstone!" - it is not known exactly what a slumberstone is or where it originates from.

For full information, refer to the Bestiary page or the according section on the Goblin page. Enemy specific:

In addition to witnessing these techniques, it is necessary for Pawns to participate in killing 250 - 285 Grimgoblins either with their own Arisen or while traveling with others.

" 'Tis no normal goblin!"
"Seems even monsters have changed..."
"A black goblin...? I've ne'er seen its like..." (no Bestiary knowledge)
"Grimgoblin!"
"You must strike hard to make a grimgoblin flinch."
"Do not let their size deceive you!"
"Mind the Slumberstones it tosses!"
"Careful! They fall upon wounded prey as one." 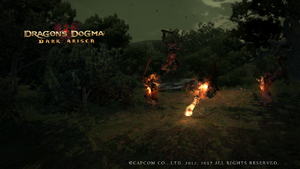 Hellhound heats up the Grimgoblin party.
Add a photo to this gallery
Retrieved from "https://dragonsdogma.fandom.com/wiki/Grimgoblin?oldid=316583"
Community content is available under CC-BY-SA unless otherwise noted.