Start a Wiki
watch 01:43
What are Griffins?
Do you like this video? 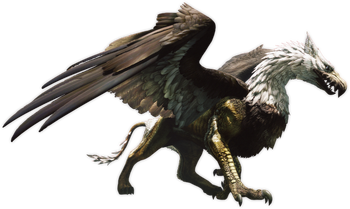 Griffin is an Enemy in Dragon's Dogma.

Griffins are large creatures with the head and wings of an eagle and the body of a lion. They are found in various locations in Gransys, usually not too far away from their preferred prey - the Ox.

The first encounter is likely to happen after the Arisen completed one of the four Wyrm Hunt Quests. Just outside Gran Soren's south gate, a Griffin will attack a burning ox-drawn cart which had previously been ambushed by Goblins.

After this, further Griffins can be seen at several locations throughout Gransys.

"Griffins are noble-looking creatures possessing the head of an eagle and the body of a lion. It is theorized that they arose from some strange bird, mutated by the effects of the Rift, that was able to adapt to this world and has since propagated.

The griffin is attracted to bright objects and habitually hoards treasures and gold. Ever vigilant, a griffin will react to even the slightest sound and are sensitive to any nearby presence, so do not let your guard down just because the beast appears to be asleep.

Griffins’ wings can also become electrically charged when flying through the sky, allowing them to employ lightning attacks.

Griffins have relatively high intelligence for a magical beast and are different from those creatures that act impulsively on instinct alone. This is why griffins have been respected as noble creatures since ancient times. Even in the present day, the image of a griffin is often emblazoned upon swords and armor and used in the standards of knights.

Griffins are not particularly quarrelsome or aggressive and they hunt primarily for food, not sport. They pose little threat to beasts which are not among their prey. That is, as long as you do not attempt to steal their treasure."
―Griffin (www.dragonsdogma.com)

Griffins circle a wide area of land seeking prey - they only land and attack if they sense a meal. Innately they are not as aggressive as some other creatures, and will generally not attack a fully armed party of adventurers.

However, if closely approached the Griffin may attack the party and the Griffin's battle theme ("Griffin's Bane") will be played.

Griffins seem to target Ox in preference - they will swoop, pick up an Ox, and carry it off to their nest if not interfered with. It can be difficult to get a Griffin to engage in combat :

Reducing the options for potential meals may be helpful - for example on the Estan Plains kill most of the Ox and wait in Ambush near a surviving one.

Once engaged in battle with a Griffin, using Shield Drum or War Cry will cause it to focus on the person drawing attention - typically the Griffin will hover facing them, possibly preparing a Wing Buffet attack, creating a potential opportunity to pawns to mount the beast using Launchboard or Ladder Blade.

Three party members are needed to ground the beast - the third must grab onto the Griffin when it is airborne.

In addition to witnessing these techniques, it is necessary for Pawns to participate in killing 15 Griffins either with their own Arisen or while travelling with others.

"Ready yourself! ' Tis a powerful foe!" (first time seeing)
"There, Master -- a griffin!"
"We're no match for its strength. We must outsmart it!"
"Strike, afore it flies higher!"
"Now! Strike the wings!"
"Burnt wings cannot fly!"
"I shall ground it!"
"Let's drag it to the ground!"
"On solid ground the advantage is ours!"
"We can wait for the beast to descend." 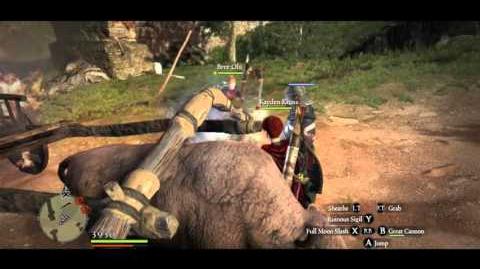 Retrieved from "https://dragonsdogma.fandom.com/wiki/Griffin?oldid=318219"
Community content is available under CC-BY-SA unless otherwise noted.