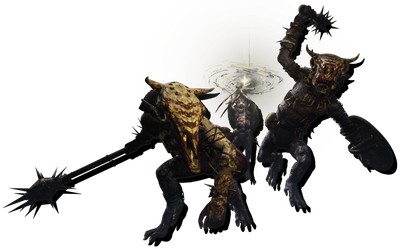 Greater Goblin is an Enemy in Dragon's Dogma: Dark Arisen.

Greater Goblins are a larger and more fearsome version of their lesser Goblin cousins. They can be found on Bitterblack Isle. Greater Goblins fight nearly naked, save for some leather wraps and bandings adorned with skull charms and teeth, and wear animal skulls as helmets. Greater Goblins wield large Morgenstern maces, and some make use of round shields.

They charge and jump into battle, and attack with a berserk fury that makes them a threat to even the wariest Arisen. Similar in appearance and behaviour to Grimgoblins, but with significantly increased staggering power and health points.

For full information, refer to the Bestiary page or the according section on the Goblin page. Enemy specific:

In addition to witnessing these techniques, it is necessary for Pawns to participate in killing 290 Greater Goblins either with their own Arisen or while traveling with others and a combined total of 390 Greater Goblins and Goblin Shamans.

"A goblin of uncommon size, Arisen!" (no bestiary knowledge)

"A pack of greater goblins!" 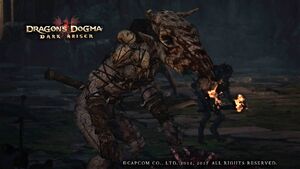 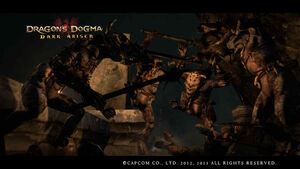 Greater Goblins stomping a pawn.
Add a photo to this gallery

Retrieved from "https://dragonsdogma.fandom.com/wiki/Greater_Goblin?oldid=314993"
Community content is available under CC-BY-SA unless otherwise noted.