Great Gamble is a skill available in Dragon's Dogma.

"An advanced form of Gamble Draw that exhaust the entirety of the user's Stamina to fire a stronger seeking shot that can be steered for a longer time."

Both skills fire a steerable arrow, that uses up all of the ranger's stamina - damage scales directly with the stamina consumed to fire the gamble arrow. Thus shooting Great Gamble with a depleted stamina pool results in reduced damage.

Due to the usual larger contribution from the consumption of stamina, a shot from a ranger with full stamina shows little dependence on longbow power, or core strength, and so is not significantly boosted by augments such as clout. If the longbow is enchanted a minor magickal component is also added.

The arrow from Great Gamble is approximately half again as powerful as that from Gamble Draw, and additionally the arrow loses the range dependence of the lower tier spell. For Gamble Draw the optimal range is mid-distance. For both skills, after around 25m out the shot will tend to 'fluff' and will not cause a critical strike, only minor damage.

Just as with other arrow shots, hitting a weakspot, or other otherwise weakened or vulnerable enemy will multiply damage.

This skill will drain all of the Ranger's stamina, therefore maintaining stamina curatives such as Mushroom Potage, Large Mushrooms, Staminal Drench in the Ranger's inventory are essential for repeated rapid use of this deadly skill in battle.

Ranger pawns are fearsomely accurate shooters, unless they are up against an extremely mobile enemy. They will reliably use this skill, with the caveat that they may waste it on minor foes.

In the hands of a high level Ranger pawn, this skill can reduce lesser Dragonkin's health to 1 health. Keep in mind that for all dragons other than the Ur-Dragon and Cursed Dragon, the Arisen must complete the actual kill by his or her own hand. 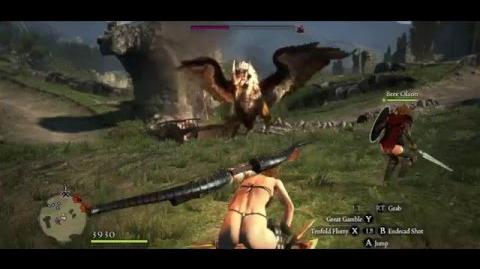 Great Gamble vs Griffin (demonstration)
The Arisen fires a Blast Arrow with a Goldforged Revenant Wail, 2 strength rings, and the Clout and Vehemence augments at a Griffin - though all these accessories have no practical effect on the damage from Great Gamble - only stamina matters. 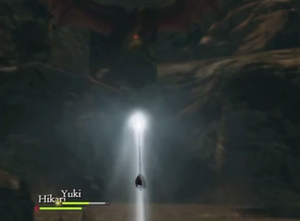 Retrieved from "https://dragonsdogma.fandom.com/wiki/Great_Gamble?oldid=318430"
Community content is available under CC-BY-SA unless otherwise noted.