Grappling is a combat mechanic in Dragon's Dogma.

Grappling allows the Arisen or pawn to grab, hold, pin or restrain enemies in position, allowing others to attack without risk - whilst grappled attacks delivers additional damage to the helpless enemy.

Only Fighters, Warriors, Assassins and Mystic Knights can grapple foes, other vocations can pick up, carry or throw downed or staggered enemies, but not grapple.

Grappled foes will struggle to free themselves, just as the Arisen can struggle when grabbed by larger foes - eventually they will break free. Character Weight or Encumbrance has no direct effect on the time it takes for a foe to break free, but if the struggling foe gets staggered by attacks (from any source) its struggle progress resets.

Additionally grappling consumes Stamina and if stamina is fully depleted the hold will be broken prematurely. The rate of stamina use is high with low Encumbrance and low with high encumbrance - but Character Weight has no effect on stamina use.

In most cases, to be grappled a foe must either be stunned, staggered, knocked down, exhausted, or in some other way incapacitated. Depending on the foe they will either be held in a 'Nelson' hold (e.g., bandits), or 'pinned' to the ground (e.g., Saurians).

When grappling a foe the usual rules on friendly fire are reversed - attacks by foes do damage to their grappled ally, and the grappler is usually undamaged. Both humanoid foes held in a 'Nelson' hold, and quadruped foes pinned take damage from their allies.

Most giant creatures have a variant of a grapple attack; for example a Chimera may grab with the snake's head, or hold down with the front paws whilst mauling the victim. Ogres, Cyclops, Golems, and the Chimera's snake combine the grabs with a "chew" attack, whilst Dragonkin either attempt to possess pawns, or smash the Arisen to the ground.

Escape is possible from most grapples (wiggle L-stick), with the exception of Dragonkin - allied attacks to all grapplers may break their hold.

Undead may also grapple their targets - the correct response is to attempt to shake lose, or in the case of an ally - grappling the foe will alsp release them - see Undead Strategy Vol. 2.

All enemy grabs are unblockable attacks. 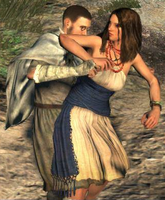 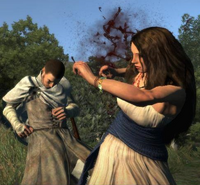 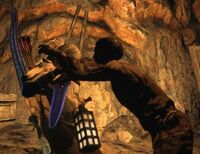 Undead grappling a Ranger
Retrieved from "https://dragonsdogma.fandom.com/wiki/Grapple?oldid=317816"
Community content is available under CC-BY-SA unless otherwise noted.