Gransys
Gran Soren is a location in Dragon's Dogma.

"Gran Soren, the beating heart of all Gransys."

Gran Soren is the capital and main habitation of the duchy of Gransys. It serves as a safe location where the Arisen and their party can rest, change vocations, trade items, and restock on curatives for the next adventure.

As the owner of Gran Soren's finest ale house, I've met just about every inhabitant of Gran Soren and heard a story from each. So of course there's much I can tell you about the city's storied past and present. Around 250 years ago the Liogran Peninsula was divided into Liore in the west and Gransys in the east. The dukes of each region were forced to answer to officials sent from the mainland. Not long after, Gran Soren was named the capital of Gransys. The town was given stone-paved roads and a water treatment system using the most incredible of current technologies. The palace was built using iron, bronze and the finest of stones, and it's not surprising to find it still standing immaculately today, 250 years later.
Modern Gran Soren is divided into numerous districts, including the Urban Quarter, the Craftsman's Quarter, a fallen area of Slums, and the Noble Quarter, where the most wealthy citizens hobnob. Our high fortress walls and surrounding plains ensure a defended stronghold with a thriving ecosystem. Wheat, livestock and yes, alcohol, are natural products of a beautifully stable climate.
Arsmith[1]

The city is divided into three main sections :

Each area is separated from the others by high walls and gates, and all are surrounded by the city walls. An Aqueduct passes through the Venery and under the city and part of it is used as the Slums by the poorest in the town. A third exit from the city is made where the aqueduct water exits the city.

For persons living or staying in and around the keep, see Duke's Demesne § Inhabitants.

I hear the streets have emptied since the Dragon's coming. I oft wonder what this place was like before. Would my own country grow so bare should the wyrm strike? Homes left empty as the people flee to safety.
Lord Julien

There are over 100 characters within the walls of Gran Soren. Some stay in one area all the time. Some wander between two or three areas. Many will leave the city at night, and a few will only be out at night. This lends the city a very dynamic feel, since the Arisen will encounter different people depending what time it is, and what part of the city they visit.

In addition to the city's residents and visitors, Escort Missions for every person living outside of Cassardis will start from the notice board in the Union Inn here.

Mostly found within the Noble Quarter :

Gran Soren is a relatively safe harbor, and few quests take place within its walls. It is however the starting (or ending) place of many quests - A Matter of Myrmidons and Lure of the Abyss begin at the Pawn Guild early in the Arisen's adventures; whilst in the Noble Quarter all the Wyrm Hunt Quests are handed out by Ser Maximilian.

Several quests require inquiring with (or overhearing) the populace of the city, including Seeking Salvation, The Wyrmking's Ring and The Cypher. An overheard conversation also leads to the quest to rescue Selene during Witch Hunt.

Other quests involve investigating Salvation incognito within the city - these are Chasing Shadows and Rise of the Fallen.

Further quests take place or begin in the Duke's Demesne, after the invitation during Come to Court. These include all the Royal Orders Quests - of which Trial and Tribulations takes place mostly within the city. During Honor and Treachery an attack on the city must be thwarted.

Members of the Royal court also request the Arisen's assistance, including Fedel (The Conspirators) and Mirabelle (Arousing Suspicion and Duchess In Distress). Quests involving the Duke directly include Reward and Responsibility and A Warm Welcome.

Lesser quests involve helping persons in the city - including Reaper's Scorn, Land of Opportunity, Escort Duty, Idol Worship, Supplier's Demand, and A Troublesome Tome. Madeleine's questline comes to an end with her fleeing the city during Bad Business.

Furthermore, almost all of the general populace may request escort to one location or another at some point. For more details see each persons biography, or Escort quests.

For lists see the individual locations or Notice Board Quests

"A place one can live without fear of monsters!"
"What meaning do you suppose those stones hold?"
"The city has amenities for every need. Armorers, apothecaries, an inn to rest..."
"The Pawn Guild stands ahead. 'Tis a gathering place for my kind."
"We'll like find shops selling weapons and sundries within."
"This must be an alehouse."
"Many's the person comes to drink here, all bearing different tales."
"The scrivener at The Black Cat here can duplicate objects in your possession."
"What's more, the proprietor can furnish forgeries of certain items."
"Precious things gone lost or missing have a way of turning up there."
"From day to night, this area feels completely different."
"Naught beats a rooftop for a vantage on the city's hidden corners."
"Seems a path runs along the top of the castle walls."
"The city has a church as well?"
"As expected of a residential area, 'tis much more quiet."
"Most of the doors are barred tight... For fear of the dragon, perhaps."
"Mind the guards on watch. They'll not suffer any untoward behavior lightly."
"Aye, the inn offers a clean bed, but it deals in vocations and skill, besides."
"You humans certainly do make a lot of expressions."
"Your different countries, cities, people... Intriguing."
" 'Tis dreadfully easy to while away hours just shopping." 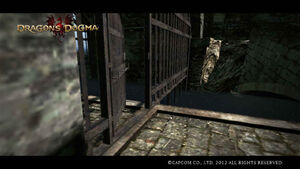 An exit by the Slums