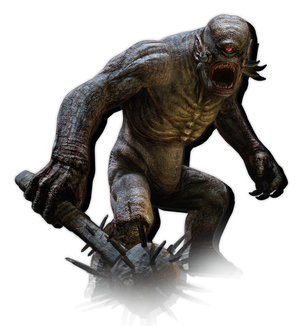 Gorecyclops is an Enemy in Dragon's Dogma: Dark Arisen.

Gorecyclops are larger, pale versions of the Cyclops from Dragon's Dogma. They share similar characteristics to a Cyclops, but are more ferocious and stronger than their cousins. Their eye is always glowing red in combat, similarly to a berserk Cyclops. They fight with a spiked club or their bare fists, and can also pick up and throw objects such as Large Stones and Explosive Barrels at the party.

There are two versions of Gorecyclopes. The first one is the same size of a regular Cyclops; the second form is enormous, and is covered in spiked armor (see Condemned Gorecyclops).

What're you lookin' at?!
Add a photo to this gallery

Retrieved from "https://dragonsdogma.fandom.com/wiki/Gorecyclops?oldid=318308"
Community content is available under CC-BY-SA unless otherwise noted.