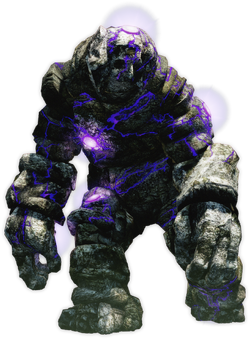 Golem is an Enemy in Dragon's Dogma.

" Golems are humanoid figures made mostly from clay and stone. Buried within their bodies are magickal charms that grant them the ability to move autonomously.

Their dimensions are decided by their creators, but most do tend to top twenty feet at least. Golems are often created to guard important places, treasures, or people, and they follow orders loyally and without question.

Golems are a powerful force to be reckoned with, considering their overwhelming physical strength and defensive advantages, but if you can destroy the charms within them that grant them life, they will stopped forever.

Since golems are little more than puppets obeying the orders of their creators, they do not possess wills of their own, nor emotions or even a sense of self. Accordingly, they are not capable of any type of communication.

Thanks to their artificial nature, golems do not have pain receptors and will not be stopped by bodily damage. They also lack sight and detect enemies by life force alone. Tactics intended to impair their vision will thus be meaningless."
―Capcom official description[1] 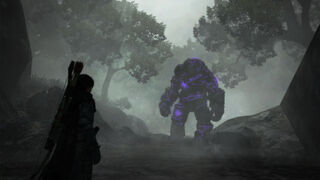 The seven glowing magickal medals on a Golem's body grant them life and serve as their weak points. While most of the medals are scattered around the body, some are hidden in harder to reach places such as under the sole of its foot or in its palm. One of the medals will glow more brightly than the others and if this glowing medal is destroyed, the Golem will immediately "shutdown", going into a state of vulnerability. This gives the Arisen and their party ample time to quickly shatter any remaining medals. Word of warning though, after the Golem becomes frozen for a while, it will reactivate itself and "roar" sending everyone flying off its body. The color of the medals then switches to red, signalling that the Golem has entered the Berserk Rampage mode, which causes its attack speed to increase significantly. This can catch unwary targets off guard when they are used to its big, slow lumbering movements. Destroying several more of the medals or simply waiting out the Berserk Rampage will revert the Golem to its normal state.

Values refer to the discs.
† Reduced defense when raging
‡ Golems have a very high resistance to Magick - but not complete immunity

Generally only defeatable by physically destroying the seven glowing medals on its body.

Usually one of the Golem's medal is a vulnerability - its location is revealed by attacks with magick. When the glowing disc is destroyed it causes the golem to 'shutdown' for a brief time, during which time it can be attacked with impunity.

After shutdown the golem will rage, indicated by a more intense purple color coursing through its body. Whilst in this stage it becomes more aggressive - however its discs are weakened.

There is a medal underneath the Golem's foot, usually hard to target - it can be exposed by:

Immolation will damage the foot disc even when standing.

Oddly attacks on the foot medal whilst climbing don't get the usual damage boost.

Though the Golem is almost immune to magick, spellcasters should still cast spells to reveal the Golem's weaker disc.

In addition to witnessing these techniques, it is necessary for Pawns to participate in killing 15 Golems either with their own Arisen or while travelling with others.

"Golem!"
"Stone, animated by magick... A golem, Arisen"
"Seems golems pay little mind to mages."
"Strike at the glowing discs!"
"We must destroy those amulets!"
"Don't let it tread on you!"
"Now, while we can get at that disc!"
"'Tis down! Smash the amulets!"
"It stopped! Now!"
"I'll try striking where it glows!"
"So those amulets served to animate the brute?"
"How can we stop such a hulk?"
"'Tis useless! It repels all attacks!"
"'Tis dangerous in this state, but its amulets grow frail!"
"'Tis gone mad! Stand clear!"
"'Tis gone made with rage!"
"Its defenses seem down just after it fires that beam..."
"Magick ought expose its weak point!"
"A spell will expose its amulets."
"Those glowing discs are its weakness!"
"Those glowing amulets serve as its heart!"
"Destroy the discs that give it strength!"
"I'll strike it with magick! Attack its weak point!"
"How do we get at the amulets 'neath its feet?"
"That light beam is deadly! Stay clear!"
"Those amulets power its movement."
"Beware that ray of light!"
"Blunt strikes will best shatter the discs."
"Perhaps if we aim for the lighted discs?" 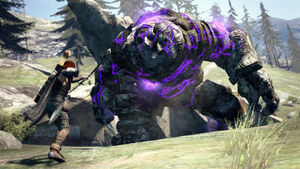 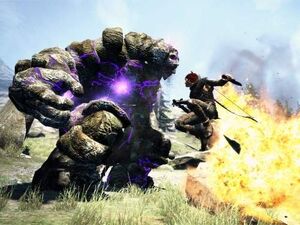 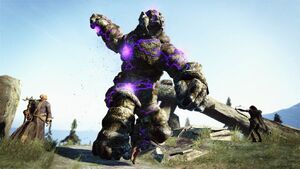 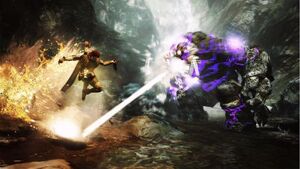 Retrieved from "https://dragonsdogma.fandom.com/wiki/Golem?oldid=323858"
Community content is available under CC-BY-SA unless otherwise noted.