"A magnificent gilded belt worn only by those who achieve wide renown."

The design of the Golden Belt is also used in the Scale Coat, in a lesser metal. 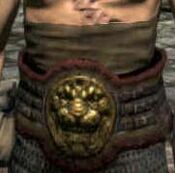 Add a photo to this gallery
Retrieved from "https://dragonsdogma.fandom.com/wiki/Golden_Belt?oldid=290254"
Community content is available under CC-BY-SA unless otherwise noted.