Goblin is an Enemy in Dragon's Dogma.

We eats when 'ungry an' we sleep when tired from eatin'! We kill them as we want 'em dead. —During The Final Battle

"Goblins are one of the species of foes that can be found inhabiting not only Gransys, but every corner of the world.

Their physical frames are quite similar to those of humans in structure, but even at full height it is rare for a goblin to reach five feet. Consequently, goblins cannot match the fearsome abilities of most other beasts and an individual goblin possessing some sort of weapon is only about as powerful in battle as an unremarkable human.

They possess about as much intelligence as a small child and are able to use rudimentary tools and weapons. Goblins appear to communicate with one another in their own particular language and some can even use a smattering of human speech.

Goblins usually form revels of five to ten individuals, commanded by a single leader. Strength in numbers is considered to be the goblin’s greatest weapon.

Goblins will also take human weapons and armor, mostly plundered from their fallen victims, and don them in their own fashion. Their looks may be laughable in the eyes of men, but the goblins seem to think that they look very fine in their outlandish outfits.

Goblins are able to take advantage of other creatures, thanks to their rather human-like intelligence. They have been known to set loose cyclopes, which they somehow are able to enslave, upon their human enemies."
―Capcom official description[1]

Goblins are found mostly anywhere outside of human influence, though they do not favor the cold north. They like to set up camp in abandoned human dwellings, small caves, or in the shelter of large rocks. They are also known to hide in underbrush for surprise attacks. There is a concentrated Goblin presence in the south of Gransys in the Verda Woodlands.

Goblins are some of the most common foes in Gransys, but usually do not pose a real threat unless they appear in large numbers. Additionally, Goblins are often accompanied by the larger and considerably more dangerous Hobgoblins.

Goblin 'kings', the leaders of a Goblin band, wear a crude crown made out of some black metal or other material. If killed, the rest of the troop may run away.

Some Goblins (and Hobgoblins) will call for reinforcements via a signal horn. If allowed to continue, more Goblins and/or Hobgoblins will join the battle. Additionally it invigorates the goblins making them more aggressive. Killing the horn-blower will stop reinforcements from arriving, which should be prioritized as Goblins can be problematic if they swarm.

Goblins tend to rapidly repeat their attacks and this may lead to staggering or knockdown, leaving their target vulnerable to many follow-up attacks. Goblins will also throw rocks, torches of lit kindling and flasks of oil; if tarred is inflicted, then getting hit by a burning torch will immediately cause burning as well as increasing initial fire damage.

Goblins are vulnerable to poison and appear intoxicated when so afflicted. They become disorientated and stagger about, unable to effectively participate in battle. They are susceptible to burning, which may cause them to panic and run around.

Most Goblins wear little to no armor, and some even lack a weapon, relying on a primitive 'barge' attack. Some carry a club similar to the Thousand Troops mace and many carry a Round Shield. Some smaller Goblins have taken to wearing body "armor" that consists of two Iron Shields strapped to the body which can effectively block attacks. Goblins also wear helmets of dubious provenance and scavenged armor pieces.

When their 'king' is killed, a Goblin pack loses morale, and may attempt to flee the battle.

In addition to witnessing these techniques, it is necessary for Pawns to participate in killing 500 Goblins either with their own Arisen or while traveling with others.

For full information, refer to the Bestiary.

"Even in numbers, a weakling is a weakling still!"
"Goblin!"
"Careful, a goblin!"
"Rrgh, they grow frenzied!"
"They're a threat when well unified."
"They're simple prey once hobbled!"
"Goblins ill like fire!"
"Take aim for their chieftain! There, with the helm!"
"Those shields are a bother..."
"Knock it to the ground and its shield is useless."
"A horn – they call for aid!"
"That horn will draw more of its kind!"
"Do not allow it to blow that horn!"
"I'll put an end to that stone-caster."
"The one casting stones – end him!"
"Goblin packs are ruled by the strong."
"They breed like rabbits, these goblins..."

Just like humans (and pawns) Goblins use language to communicate - they use it in a similar way to pawns -alerting other goblins to human enemies, and calling out primitive tactics.

On spotting a foe

On defeat of their crowned leader

"We won't forget this"
"Retreeeeat!" 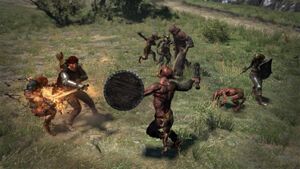 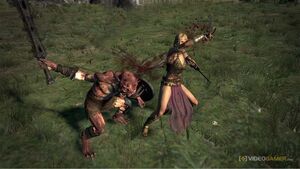 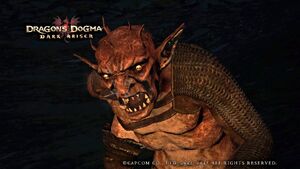 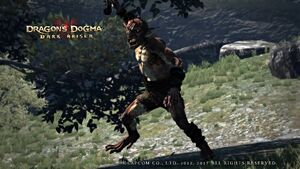 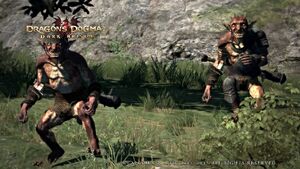 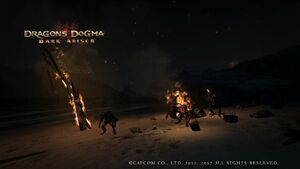 Retrieved from "https://dragonsdogma.fandom.com/wiki/Goblin?oldid=319937"
Community content is available under CC-BY-SA unless otherwise noted.